Massapanspermia Theory: The Transfer of Bacteria Between Planets

In the past few years, scientists have observed how bacteria behave in space and how they thrive in the oxygen-rich environment of the International Space Station (ISS). Recently, researchers discovered that a particular species could survive in space by forming a thick clump.

Some believe the Earth's origin of life came from space via asteroids nearly four billion years ago—this is also known as the panspermia hypothesis. Signs of life and water on other planets and cosmic bodies reinforce this theory. The 'seeds of life' may have been bacterial spores that allow bacteria to remain dormant when nutrients are not available. 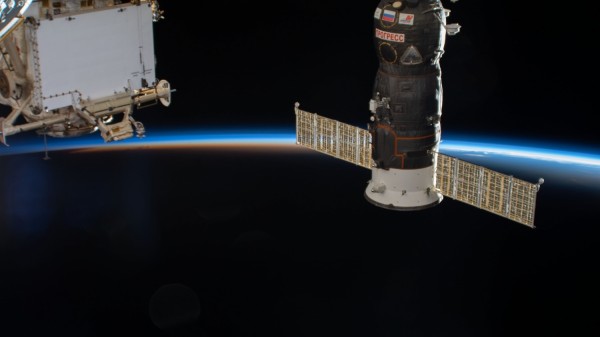 Scientists have discovered Deinococcus radiodurans on an external panel of the ISS, which was revived after it had dried outside in space for more than three years. The species can survive extreme temperatures, radiation, UV light, and dehydration. The new study has been published in the journal Frontiers in Microbiology.

Professor Akihiko Yamagishi from Tokyo University and his team discovered that when bacteria aggregates, or forms into a thick mass, it can survive space journeys and harsh conditions. The team also thinks that Mars could have been possibly involved in the panspermia theory, which may be confirmed after the Mars missions.

Twelve years ago, Yamagishi and his team used an aircraft and balloons to trace what microbes may be present in the upper atmosphere or the troposphere. Deinococcus radiodurans was found up to around 7.5 miles above the planet's surface. The same bacteria were involved in experiments of an exposure experiment outside the ISS from 2015 to 2018 on the Japanese Experimental Module Kibo.

Clumps thicker than half a millimeter partly survived space for three years. A layer of dead bacteria on the outer surface of the aggregates formed a protected crust. The remaining bacteria underneath survived despite dehydration for several years.

The experiment enabled the team to predict how long bacteria can survive in space's harsh conditions. For example, a one-millimeter thick aggregate can probably survive up to eight years in space. Denser clumps would likely survive between 15 to 45 years.

FIND OUT MORE: How Does Bacteria Behave in Space?

Professor Yamagishi explained that the bacteria "have multiple copies of genomes and a heightened ability to repair the damage done to DNA." When the samples were rehydrated, the bacteria repaired itself. Yamagishi called this discovery the 'massapanspermia' theory, meaning the microbial aggregates may be transferred between planets.

The new research is exciting, but plenty of work is needed to strengthen the panspermia further and now massapanspermia hypotheses. Theoretically, microbes could last long enough to make the trek to Mars, but that claim comes with some qualifications.

"The average time required for objects to transfer between Mars and Earth is around tens of million years," said Yamagishi. "However, in the shortest orbit, it takes only months or years, though the frequency is very low." If microbes on Earth were to hitchhike on a journey to Mars, it remains undetermined if the bacteria would survive more than 45 years.

Check out more news and information on Bacteria on Science Times.