4 Examples of Origami-Inspired Innovations in Science

Origami, the ancient Japanese art of folding paper, is more than a creative way to pass the time. It has started to surge in popularity during the past few years. Only this time, not just an artform, but also as a reference for mechanical designs with tailorable properties.

With its beauty founded on subtle mathematical concepts, Origami offers patterns in creating efficient and flexible structures. Here are four examples of how the ancient art of folding papers have led to innovative applications in various fields of science: 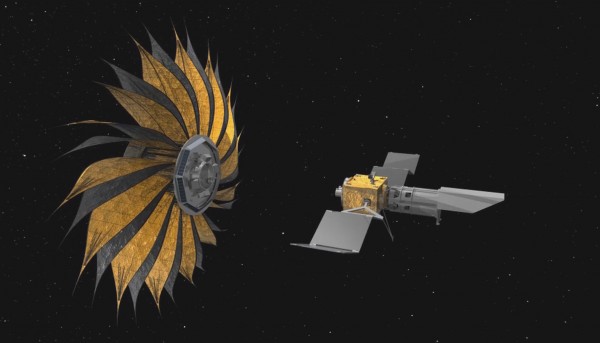 (Photo : NASA Jet Propulsion Laboratory, California Institute of Technology)
This artist's rendering shows the proposed starshade concept flying in sync with a space telescope. The giant sunflower-like structure would be used to acquire images of Earth-like rocky planets around nearby stars.

According to the National Oceanic and Atmospheric Administration (NOAA), more than eighty percent of the oceans remain unmapped, unobserved, and unexplored. Among the wonders kept hidden are the life in the deep waters - from elusive jellyfishes and octopi to other organisms that are unbelievably old.

Researchers from Harvard University's Wyss Institute, John A. Paulson School of Engineering and Applied Science (SEAS), and Radcliffe Institute for Advanced studies have collaborated to create an origami-inspired folding structure that can safely handle marine life. The polyhedral enclosure opens and closes when a motor applies torque to the base where the "petals" meet, these petals then fold to actuate the enclosure.

One of the persisting efforts in astronomy is finding exoplanets with the goal of studying them and ultimately finding another that can support life as with Earth. The problem: some stars emit so much light that detecting exoplanets is difficult. To work around this difficulty, engineers at NASA's Jet Propulsion Lab have developed the Starshade. It is an occulter, or a device that blocks excessive light to allow observation of fainter bodies.

Upon launch, the occulter is folded and then starts to unfurl into a sunflower-like structure in front of a space telescope. To turn the concept into reality, NASA has actually enlisted origami experts to help figure out how to fit a baseball diamond-sized structure inside the rocket that will carry it to space.

RELATED: Origami-Inspired Foldable Lunar Shelter for NASA's Artemis Set to be Tested on Arctic this Fall

Technology often leads to novel techniques to cure diseases, usually resulting in improvements in terms of efficacy, safety, and convenience. In chemotherapy, conventional agents are usually limited by solubility, stability and cytotoxicity - the quality of being toxic to cells - often resulting in reduced efficiency of therapy. One of the several applications of nanotechnology, with Origami, is in DNA nanostructures that support chemotherapy.

A scaffolded DNA origami technique, the basic units of these DNA nanostructures, was first introduced by Paul Rothemund back in 2006. A long, single-stranded DNA (ssDNA), or the scaffold, is held in place by short ssDNA, or the staples. It allows scientists and researchers to design and fold the ssDNA to different patterns. It was later improved by other researchers, being used as a drug delivery mechanism.

This one is still in its infancy, so to speak, but has the potential to introduce a new class of memory devices. A team from New York University Abu Dhabi and The University of Warwick has fabricated a paper device that acts as a mechanical switch. The device is called KIMS, based on the Kresling pattern which is a specific origami technique that allows a cylindrical structure to act like a bellow rising and sinking through its deformable sections or folds.

By using an electrodynamic shaker, researchers were able to demonstrate a two-bit memory board with two KIMS - being capable of switching its binary states from 00, 01, 10, and 11.