Top secret footage of the largest nuclear explosion in history was just released by Russia. In 1961, the Soviets recorded a 40-minute documentary of Tsar Bomba being tested and detonating over the Barents Sea. 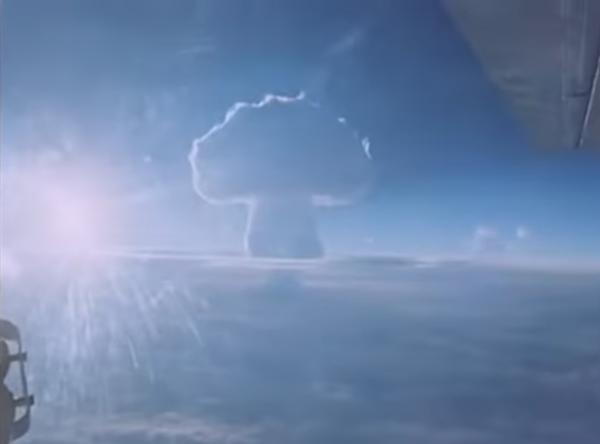 The thermonuclear bomb weighed 50 megatons, causing an explosion equivalent to the force of 50 million tons of conventional explosives. The enormous impact is 3,000 times greater than the atomic bombs, 'Little Boy' and 'Fat Man,' dropped in Hiroshima during World War II, each weighing about 9,700 pounds and 10,800 pounds, respectively.

Cameras had to be hundreds of miles away from the nuclear bomb to both captures it and be safe from the impact. The distance also allowed photographers to capture the impact during the low-light conditions and not be blinded by the bright flash of the explosion.

The explosion begins by sounding like thunder as a fireball shoots up into the sky for less than a minute, then turns into a mushroom cloud. An aircraft also captures some footage from about 100 miles away as the mushroom cloud continued to rise. The cloud's peak was measured to be nearly 213,000 feet high.

The bomb detonated at about 13,000 feet above the ground and had a shockwave that reached a radius of nearly 40 miles out. On the Richter scale, it is equivalent to a 5.0 earthquake.

The explosion was massive enough to be witnessed in Norway as radiation had spread out all across Scandinavia. As Russia continues to run numerous nuclear plants, nearby Scandinavian countries have picked up radioactive isotopes in the atmosphere.

Kremlin had kept the footage a secret for over 60 years before Rosatom released it to celebrate their 75th found anniversary. Rosatom, Russia's state nuclear agency, has specialized in nuclear energy since World War II. Today, they continue to be one of the world's top leaders in nuclear energy with enterprises across the globe while responsible for about 19 percent of Russia's electricity.

The Russian military had designed the Tsar Bomba to be the largest nuclear bomb ever created. It was developed during the Cold War while the United States was also developing its thermonuclear bombs.

During that period in 1954, the United States also detonated their largest nuclear bomb named Castle Bravo. The demonstration occurred in the Marshall Islands with an impact of 15 megatons. The Soviet military immediately and successfully began developing a much larger thermonuclear device.

Once completed, the Tsar Bomba was safely placed into an aircraft bomb case and transported via train to the Olenya airbase. It was then loaded into a Tu-95 long-range bomber and ready to be detonated.

By October 30th, a bomber carried the Tsar Bomba 600 miles away to Severny Island. The nuclear device was dropped in the Arctic Circle with a parachute attached to it as the aircraft safely flew away from the blast radius.

Two years after the demonstration, the Soviet Union and the United States signed a treaty that banned atmospheric tests of nuclear weapons, moving all testing underground. During this time, the United States developed smaller nuclear bombs that could fit inside missiles. By 1990, all nuclear testing had been banned.

READ MORE: Project ITER Paves the Way for the Future of Nuclear Energy