Ever since NASA and the ESA launched the Hubble Space Telescope, it has made more than one million observations over the last 30 years. One of its most recent observations was capturing an image of a supernova blast wave that was over 2,000 light-years away from Earth. 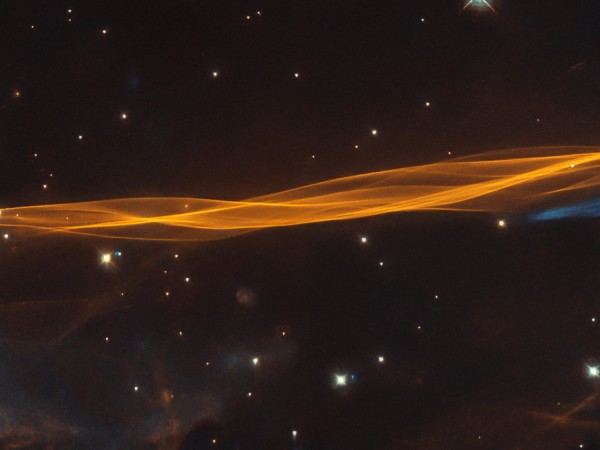 When a giant star is near its death, nuclear fuel from its core generates a massive amount of energy. Eventually, the immense pressure from the core pushes outward as the star's gravitational force pushes inward to keep the celestial body together.

Eventually, the star runs out of fuel, and pressure from gravity collapses, pushing all the energy outward, creating a massive explosion and an even greater shock wave. The resulting blast is exceptionally bright and powerful.

Supernovas can also be the result of two white dwarfs getting too close to each other's orbit. When one white dwarf runs out of fuel, it is pulled by the gravitational force of the other, creating a massive collision.

The European Space Agency said the recent veil of light in space was the outer edge of the shockwave of a supernova explosion. The impact blasted a dying star nearly 10,000 to 20,000 years ago. They estimated the star to be about 20 times the size of the Sun and 36 times the size of the Moon.

The explosion was a Cygnus supernova blast wave, named after the Swan or Cygnus constellation. Measuring the impact, the blast had expanded nearly 60 light-years from the giant star's center.

The ESA explained, 'the interaction of ejected material and low-density interstellar material swept up by the shockwave forms the distinctive veil-like structure seen in the image.' Currently, the 'delicate and light' supernova blast wave continues to expand at nearly 220 miles per second.

While capturing an image of the Cygnus supernova blast shock waves, Hubble also observed Cygnus' wider loop. The Cygnus Loop nebula is a stellar nebula or an expanding cloud of hot gas that was created from the same supernova.

NASA's Galaxy Evolution Explorer has also captured the nebula and is about three times the size of the Moon. The nebula is about 1500 light-years away from Earth and is the remnant of a supernova that occurred 5,000 to 8,000 years ago.

It is also typical of exploding stars to leave a remnant such as a black hole or a neutron star. Planetary scientists still have not found a remnant left by the recently discovered supernova, but they have predicted that neutron star may be left behind. The resulting remnant is estimated to be 15 times the size of the Sun.

Check out more news and information on the Hubble Space Telescope on Science Times.