Ascension: How Did David Blaine Fly Over Arizona Desert While Holding on To Helium Balloons?

On September 2, illusionist David Blaine successfully flew over the Arizona Desert while holding on to 52 large helium balloons. Millions of people worldwide have witnessed this incredible stunt as he and his team filmed it live on YouTube.

He started the video explaining how he came up with the idea of his new stunt. He said that he has always dreamt of flying because of a movie he saw with his mother, hence his levitation stunts.

Even if it looks like a kid's dream, Blaine admitted that Ascension is the most ambitious performance of his entire life. He has not done any projects since her daughter was two years old as he wanted to do something that will inspire her and not scare her.

Together with his team of experts in various fields, he was able to pull off the difficult stunt and landed safely on Arizona Desert. 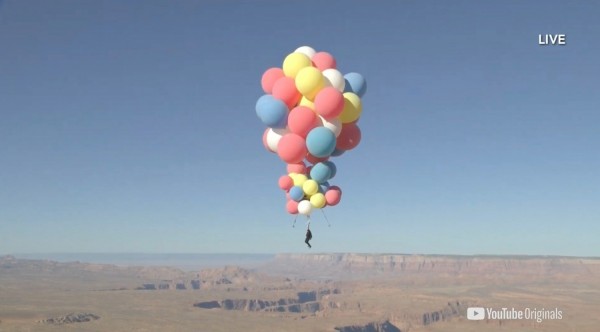 (Photo: Reuters Connect)
Extreme performer Blaine hangs with a parachute under a cluster of balloons during a stunt to fly thousands of feet into the air over Arizona

David Blaine spent two years of training for his stunt Ascension. He obtained a pilot's license, a commercial balloon pilot's license and became a certified skydiver.

His stunt lasted for about 30 minutes and reached a height of almost 24,900 feet above the ground, an altitude where most commercial airlines would travel. The trickiest part of it all was landing on the Arizona desert, a terrain he is unfamiliar with.

Based on his weight of 198 pounds, Blaine was harnessed to 42 eight-foot balloons and ten smaller balloons of just four to six feet.

To start ascending, he gave the first weight to his daughter, who was watching him do the stunt. Later, he shed ballast of multiple small sandbags to control the altitude before releasing the balloons and descends.

Blaine explained that it was like controlling a propane-gas balloon. He was fitted with an oxygen mask and parachute for his safety. He was also in constant communication with his team to ensure his safe ascent and landing.

"Wow! That was awesome!" Blaine exclaimed after he landed. His stunt was the first "cluster ballooning" broadcast live from the perspective of an astronaut.

Read Also: Flying Cars May Be Commercialized by 2050

The idea of a man flying with a bunch of balloons seems so easy. But Blaine's stunt was no joke. His team was composed of experts from different fields, including aviation, ballooning, and skydiving. His team made sure that the stunt will be successful and safe to perform.

He also has a meteorologist in his team to predict the weather and responsible for making the final call to launch. The team said that they are training all the ground crew to assist each other in Blaine's stunt.

In order to make his stunt legal, Blaine and his team had to create a fiberglass balloon (payload) complete with all the equipment that they will need. It has the transponder, oxygen, Blaine's parachute, and equipment for transmitting audio and video to his crew.

His team had to consider many things while Blaine is floating in the sky, like having hypoxia, the temperature, parachute, and the landing. Essentially, Blaine's stunt is all about teamwork and science.

Read More: Kite Aerodynamics: How Did a Kite Lift a 3-Year-Old?

Check out more news and information on Physics & Math on Science Times.