Flying Cars May Be Commercialized by 2050

A Japanese firm recently conducted a successful test flight of a flying car with a passenger on board. The vehicle is by SkyDrive Inc. is supported by other Japanese companies such as Panasonic and automaker Toyota. 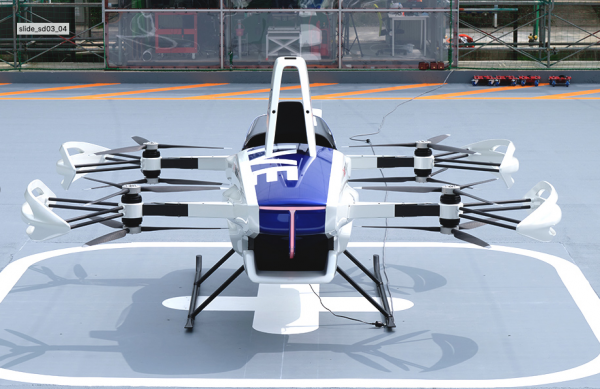 SkyDrive's flying car project is just one of more than 100 projects around the world. Other companies working on flying cars include Uber Technologies Inc., Airbus SE, and Boeing Co.

The flying car has two seats and looks like a small Smart car crossed with a mini-helicopter. The prototype is also battery-operated with two propellers on each of the four corners. SkyDrive Inc. compares their vehicle like the one from the Jetsons cartoon.

SD-XX, the concept model, is the smallest developed flying car at only 4.9 feet tall and 13 by 11.4 feet across. It can fly up to 62 miles per hour, shared the firm, and can easily take off and land on convenient places such as the roof of a building.

With the help of the government and other companies, SkyDrive hopes that the car can be commercialized within a few years. One of the government's goals is to one day have airspace transportation to reduce traffic jams in the big cities.

Flying cars could also be used as another mode of transportation to travel to remote islands, mountainous areas, and for emergency uses such as natural disasters.

CEO Tomohiro Fukuzawa shared that despite more than 100 flying cars being developed, 'only a handful has succeeded with a person on board.' His priority is the safety of passengers as the vehicle still needs more safety improvements before becoming commercialized. So far, the prototype can only fly between five to ten minutes.

The company has come a long way in improving its flying car prototype since it began in 2012. Fukuzawa believes that the time for electric vertical take-off and landing aircraft (eVTOL) will occur as soon as 2050.

Rajeev Lalwani, an analyst from Morgan Stanley, shared that the market for flying cars 'could likely begin as an ultra-niche add-on to existing transportation infrastructure, similar to how helicopters operate today.' Eventually, the vehicles will be a cost-effective and time-efficient way to travel short and medium distances, 'eventually taking business away from car and airline companies.'

By 2023, Fukuzawa hopes to commercialize an air taxi service with their vehicle in Tokyo or Osaka and then sell it to the public five years after. He shared that challenges include getting certified for commercial flights while ensuring safety and reliability the same way that aircraft do. It might also take some time for society to understand, accept, and want to ride in flying cars.

WOW: Dubai All Set To Fly Passengers In Self-Flying Drone-Taxi

Check out more news and information on Design on Science Times.