According to Cision, the appointment follows the Canadian government's "open, transparent, and merit-based selection process." Campbell will be replacing Laporte, who has been the president of the Space Agency since 2015.

The news release announcing Campbell's assignment noted that the new appointments to its key departments "respect the principle of diversity." 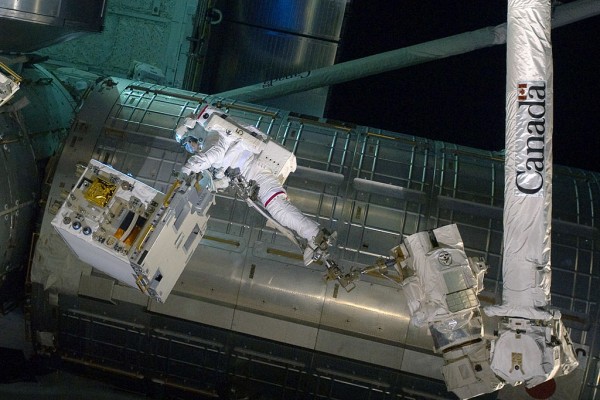 (Photo: Photo by NASA via Getty Images)
IN SPACE - JULY 12: In this handout image provided by the National Aeronautics and Space Administration (NASA), NASA astronaut Ronald Garan attached to the robotic arm Canadarm2 moves a failed ammonia pump module from a storage platform on the International Space Station to the cargo bay of the space shuttle Atlantis during a planned six-and-a-half-hour spacewalk July 12, 2011, in space. Canadarm2 is the predecessor to the Canadian Space Agency's latest robot for the future Lunar Gateway project. CSA welcomes its first female president, Lisa Campbell, through a government announcement on September 3.

Before beginning her tenure as the first female president in the space agency's 31-year history, Lisa Campbell has held various posts at the Canadian Government. Her most recent was serving as an Associate Deputy Minister for Veteran Affairs Canada for two years. Prior to this, she also worked as the Assistant Deputy Minister for Defense and Marine Procurement, leading the government arm responsible for its military and marine equipment acquisitions.

Navdeep Singh Bains, Canada's Minister of Innovation, Science, and Industry, expressed confidence in the newly-assigned CSA president. "Lisa Campbell has worked tirelessly in the service of Canadians throughout her career and has the experience and abilities to move the agency forward on future explorations."

"Her experience in defense procurement will hold her in good stead as she takes over some of the most important procurements for the space sector," Bains said in a press release. The federal minister also took the opportunity to express gratitude to outgoing CSA president Sylvain Laporte for his "excellent work leading the agency for the last five years."

In an interview with CBC News, Campbell shared: "One thing I have learned through my career is you've got to dream big and you've got to reach for your own stars. So I tried to do that throughout my career,"

News outlets noted Campbell's assignment at the helm of the Canadian Space Agency to be in line with the North American country's bid to reposition itself in the global space race.

Canada in the Global Space Race

The Canadian Space Agency is a federal agency first established in March 1989. Since then, it has focused its resources on three main areas: (1) Space Exploration through astronaut missions and planetary studies including scientific research studies; (2) Space utilization through satellite-based Earth-imaging and observation; (3) Space science and technology by adapting space technology as innovative Earth applications.

As Lisa Campbell takes the helm, she will be overseeing the progress of the Canada Space Agency's joint project with other countries. The Lunar Gateway project is a future space station to be located in lunar orbit - serving as a microgravity science laboratory, a solar-powered communication hub, a short-term habitation module, and an equipment holding area. It is described as "a stepping stone" for future missions beyond the Moon.

Among Canada's contributions to the US-led coalition for The Lunar Gateway project is a highly-autonomous robotic system named Canadarm3. The smart robotic system, supported by artificial intelligence, will include a large arm 8.5 meters (27.89 feet), a smaller arm, and a compartment of detachable tools.

Canadarm3 will be helping in various tasks associated with the Lunar Gateway. This includes maintenance, repair, and inspection of Gateway modules, capturing visiting vehicles, and assisting astronauts on spacewalk activities.

Check out more news and information on the Canadian Space Agency on Science Times.