NASA's latest Space Launch System (SLS) megarocket, together with its ground infrastructure, have reportedly exceeded its original cost estimates, prompting the space agency to notify Congress about the budget.

The information comes as Kathy Lueders, the recently appointed head of human spaceflight efforts at NASA, announced the cost estimates in a blog post first published on August 27. According to the NASA blog, the new development baseline costs for the Space Launch System will be $9.1 billion, with the initial ground systems associated with the mission now costing $2.4 billion.

RELATED: NASA Is Looking for Flight Directors To Lead Its Future Spaceflight Missions

"NASA has notified Congress of these new commitments, and we are working at the best possible pace toward launch, including streamlining operational flow at Kennedy and assessing opportunities to further improve the efficiency of our integration activities," Lueders' post read.

By the end of 2021, we'll be landing commercial vehicles on the Moon. The SEAL payload will be on one of these vehicles, conducting research that will help @NASA_Astronauts understand where to collect lunar samples. https://t.co/urJ3z25f7n — Kathy Lueders (@KathyLueders) September 3, 2020

The Growing Funds For the SLS Megarockets

Last March 10, the NASA inspector general released a report outlining the budgetary overruns involved in the future moon-rocket program. In the report, the actual costs were already 33 percent past the original agency baseline commitment (ABC) approved by the Congress, mandating a notification from NASA to the Congress. Figures based on fiscal 2019 numbers note an ABC of $7 billion, although the NASA report excludes the formulation costs of about $2.7 billion.

A month after, in April, a report from the US Government Accountability Office (GAO) that assessed the SLS estimated development cost at $8.75 billion, with its associated ground infrastructure - called the Exploration Ground Systems (EGS) - at around $2.33 billion. While the report was released in April, the figure estimates were generated from January.

Updates on the SLS and the Artemis Missions

The Space Launch System is a superheavy megarocket currently developed by NASA since it was first announced back in 2011. It is intended to be the primary launch vehicle for NASA's upcoming Artemis mission, which aims to return humans on the moon, as well as its future deep space exploration projects.

In Kathy Lueders' blog post, the Associate Administrator of the NASA Human Exploration and Operations (HEO) Mission Directorate has noted that the agency has been "checking-off key milestones and marching swiftly toward Artemis I." It is the planned uncrewed test flight using both the Orion Multi-Purpose Crew Vehicle and the Space Launch System, with Lueders noting that it is "just a little more than a year away from launch." 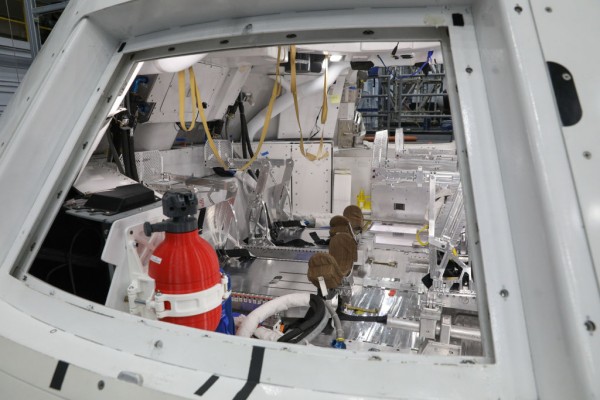 (Photo: Photo by Loren Elliott/Getty Images)
HOUSTON, TX - OCTOBER 24: A mockup of NASA's Orion spacecraft is seen inside the Space Vehicle Mockup Facility during a media preview for an upcoming public open house at NASA's Johnson Space Center on October 24, 2018, in Houston, Texas.

Lueders also enumerated NASA's achievements ahead of the expected November 2021 launch of the Artemis I mission. The teams involved in the project have already simulated portions of the launch countdown, involving a realistic run-through of the terminal count. Next, the launch vehicle stage adapter, which connects the upper and core stages of the rocket, has been delivered at Florida's Kennedy Space Center.

As for the MPCV, NASA has already conducted their Orion recovery tests at the Pacific Ocean, through the US Navy recovery vessel fitted with the "Sasquatch" - a specialized tracking tool for Orion. The recovery tests have also allowed NASA to verify its timelines for the recovery operations.