A hiker discovered the preserved remains of a 400-year-old goat embedded in a remote part of the Italian Alps.

Italian alpinist and champion skier Hermann Oberlechner discovered the chamois, a species of goat-antelope endemic to European mountains. From Oberlechner's recollection of the discovery, he was on a 6-hour hike across the snowy mountains when he saw something jutting out of the ice in Val Aurina, South Tyrol, Italy. 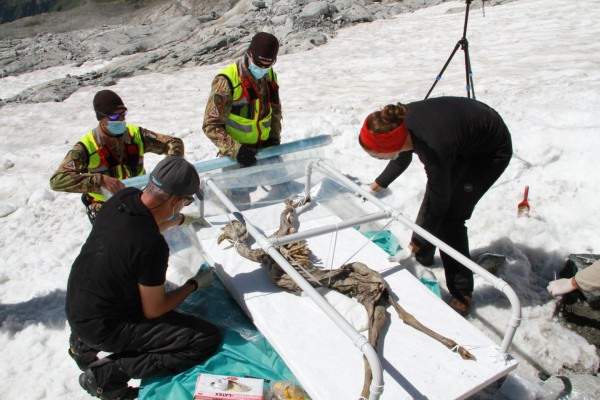 (Photo : Esercito Italiano - Comando Truppe Alpine)
Marco Samadelli, conservation expert at Eurac Research, and Eurac Research anthropologist Alice Paladin with the 400-year-old chamois discovered in Val Aurina, South Tyrol (Italy). The discovery site, at 3200 m MSL, is impassable and can only be reached by a six-hour hike. For this reason, following their initial inspection, the researchers decided to ask for the support of the Alpine Army Corps in the recovery of the animal.

"Only half of the animal's body was exposed from the snow," Oberlechner said, adding that the creature's skin "looked like leather, completely hairless."  Saying that he has never seen anything like it, the skier immediately took a photo of the finding and sent it to the park ranger. Later, both Oberlechner and the ranger notified the Italian Department of Cultural Heritage.

The discovery site was 10,500 feet above sea level, at a part of the Alps not accessible by vehicles, through a six-hour hike. The remote location prompted them to request assistance from the Alpine Army Corps. 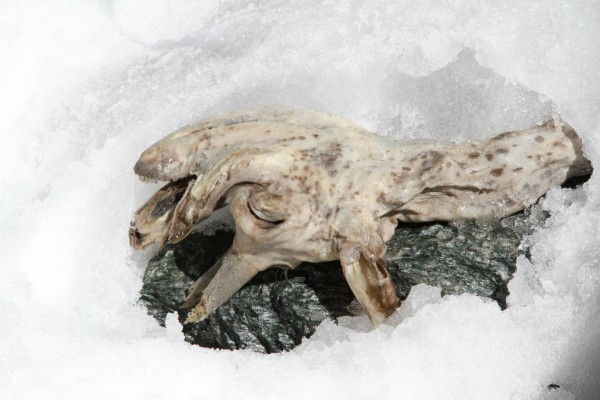 (Photo : Esercito Italiano - Comando Truppe Alpine)
Only half of the animal's body was exposed from the snow. The skin looked like leather, completely hairless.

"The request from Eurac Research came during a training phase of our military mountain rescue team," said Mario Bisica, Head of Public Information and Communication for the Alpine Army Corps.

With assistance from the Alpine Army Corps, the frozen remains were recovered and were endorsed by the Department of Cultural Heritage to Eurac Research for study.

The goat-antelope discovered in the Alps is similar to other "ice mummies," or preserved remains of dead creatures preserved by the cold and often at high altitudes. A famous case was the Iceman Ötzi, a 5,300-year-old mummified man who was believed to have lived between 3,400 to 3,100 BCE. Ötzi got his name from the Ötztal Alps, where he was discovered by hikers in September 1991. 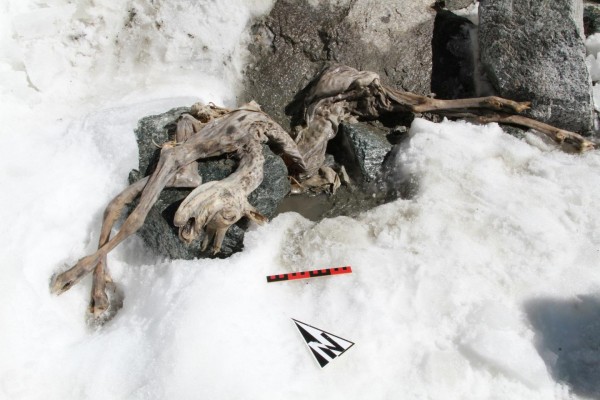 (Photo : Esercito Italiano - Comando Truppe Alpine)
An intact animal mummy is a perfect simulant for research - especially if its conditions are similar to those of the world's other ice mummies, of which Oetzi and the Inca girl Juanita are among the most famous.

Scientists are now looking to examine the 400-year-old chamois, hoping to learn how to better preserve ancient DNA samples for laboratory analysis. "Our goal is to use scientific data to develop a globally valid conservation protocol for ice mummies," said Albert Zink, Director of the Institute for Mummy Studies at Eurac Research. Zink adds that this is the first time that an animal mummy will be studied for this application.

According to Eurac Research, the chamois had been protected by the glacier, only exposing part of it due to the recession of the ice on the Alps. For mummified remains, DNA is usually degraded and only remains in minimal amounts.

"Thanks to our previous studies, we know the optimal physical and chemical parameters for preservation from a microbiological point of view," explained Marco Samadelli, a conservation expert from Eurac. He added that they would bring the goat-antelope within these parameters and study its effects on DNA. They are also looking to observe the impact of the environment on DNA deterioration.

Eurac also notes that glacier melt has been leading to increased discoveries, including biological ones such as the 400-year-old chamois. The recovery of the chamois ice mummy was also conducted during the supervision of Alice Paladin, an anthropologist from Eurac Research, using precise methods that minimize contamination and maintain preservation on the discovery.

Check out more news and information on Mummies on Science Times.