A project of the Defence Research and Development Organization (DRDO), the HSTDV uses the air-breathing scramjet technology to reach hypersonic speeds. The vehicle was tested at around 11:03 AM, from the Dr. APJ Abdul Kalam Launch Complex located at Wheeler Island at the state of Odisha, at the eastern part of the Indian subcontinent. 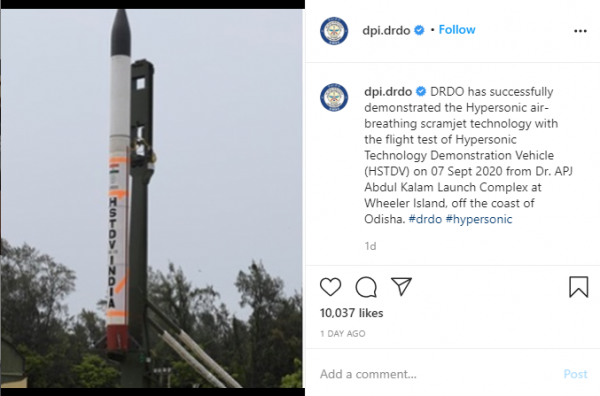 A scramjet, or a supersonic combustion ramjet, is a variant of the ramjet air-breathing engine that allows combustion in supersonic environments. As the vehicle that holds the scramjet moves at high speeds, this engine forcefully compresses incoming air through its inlet before combustion.

However, while the conventional ramjet reduces airspeed before combustion, scramjets maintain supersonic speeds from inlet, to combustion, and to the exhaust processes. This allowed the HSTDV test to sustain its flight path at a Mach 6 speed, or six times the speed of sound close to 2 kilometers per second. This speed was maintained by the test vehicle for at least 22 seconds.

With the success of the Indian Defence Research and Development Organization with the HSTDV, India now joins a very exclusive list of nations that have attained this technology - together with the US, Russia, and China. The three countries, however, are ahead in the race to develop aerodynamically maneuverable hypersonic weapons.

For example, from the August 28 Report on US Hypersonic Weapon Development, the United States has " actively pursued the development of hypersonic weapons" since the early 2000s. The report also notes that contrary to the Russian and Chinese hypersonic weapons programs, the US is pursuing applications that will not employ nuclear warheads.

The Indian-made Hypersonic Technology Demonstrator Vehicle was initially lofted by an Agni-I rocket - from the Indian family of medium to intercontinental ballistic missiles - carrying the HSTDV 18.6 miles above the ground and reaching hypersonic velocity, the DRDO reports.

It was at this point that the HSTDV's aerodynamic heat shields started falling away, and the cruise vehicle disengaged from the rocket. The scramjet engine, powered by kerosene fuel, started operating and moving the cruise vehicle at Mach 6 speeds.

"The critical events like fuel injection and auto ignition of scramjet demonstrated technological maturity," said a statement from the DRDO, adding that their scramjet was able to perform in a "textbook manner."

The DRDO wrote on Twitter, celebrating its "historic mission," which it described as a "giant leap in indigenous defense technologies and significant milestones" toward the country's visions "Atmanirbhar Bharat" or a "Self-Reliant India."

Check out more news and information on Hypersonic Cruise Missiles in Science Times.