Lucid Motors will be releasing its luxury electric sedan Lucid Air by spring 2021. Here's a sneak peek at some of the features that allow it to compete with the Tesla Model S, BMW 7 Series, and Mercedes-Benz S-Class. 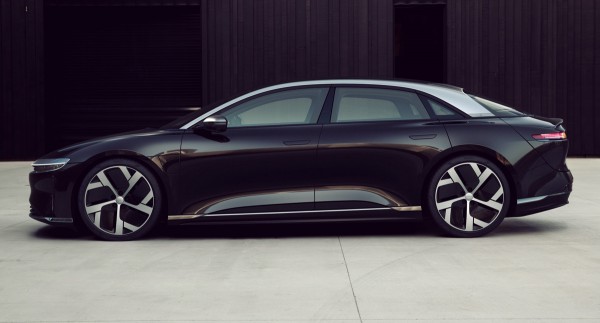 Lucid Air will have several versions starting with the elite Dream Edition next year. Priced at $169,000, the all-wheel-drive will have a dual motor with up to 1,080 horsepower.

The company also shared that the Air has a 0.21 coefficient of drag, making it one of the most aerodynamic luxury sedans ever designed. This means that it can travel more efficiently than hybrid cars built for efficiency.

The surfaces have been smoothed for minimal wind resistance and direction of airflow. The car was also designed to have more than a 500-mile range. Another unique feature is its wide horizontal lighting, making it the largest taillight on a production car.

Inside, the front seats have a darker hue while the back seat is lighter in color. The driver sits in front of a console display with touch screens. Navigation and home controls can be run via Alexa integrated into the system.

The Dream Edition has two electric motors with the following models designed with one and three motors. Its motors are powered with a 113-kWh, lithium-ion battery pack. According to the company, the sedan can have a range of 517 miles.

The car can charge quickly with DC fast chargers since its electric architecture is built with 900 volts. The Air can take 300 miles of range within 20 minutes. In partnership with the Electrify America 350-kW network, Lucid Air owners will have three years of free and unlimited charging.

It has a mobile charging cord compatible with any wall outlet. Lucid Motors also designed a bi-directional home charging station, allowing owners to use the car as a generator during times of power outages.

DreamDrive, the car's driver systems are made with Ethernet-based communication and a sensor suite built with light detection and ranging (LIDAR). The advanced and remote sensing method uses laser light to measure distance with the car's 32 sensors.

The Lucid Air has several notable safety features and advanced monitoring capabilities. These include blind-spot warning and display, traffic alerts, and an automatic emergency brake that can be used when necessary. The car can also detect if the driver is drowsy or distracted.

The company is following the trend of other new startup electric car companies by launching a premium sedan model, which will be followed by an SUV model. Lucid Motors will then release affordable models after.

The following models of the Lucid Air are the Grand Touring and Touring models, both to be released later into 2021, then the Air by 2022. All cars will be offered in black, gold, or white with a panoramic roof.

READ NEXT: Solo Electric Car that Offers Cheaper Price and Zero Emissions is Set to be Released in the US this Year

Check out more news and information on Electric Cars on Science Times.