In 1969, the whole world came to know the first man to land on the Moon. This mission was called the Apollo program or Project Apollo. Aboard the lunar lander were Neil Armstrong and Buzz Aldrin, while Michael Collins remained in the lunar orbits in the command and service module.

The Apollo program started in 1961 and lasted until 1972. Since then, however, humankind has not returned to the lunar surface. Five decades later, NASA is again planning a new lunar mission that will send a new batch of astronauts and the first woman to the Moon in 2024.

Dynetics, an Alabama-based company, has built a life-size lunar lander that will carry NASA astronauts in the next lunar mission that is named after Apollo's twin sister, Artemis. 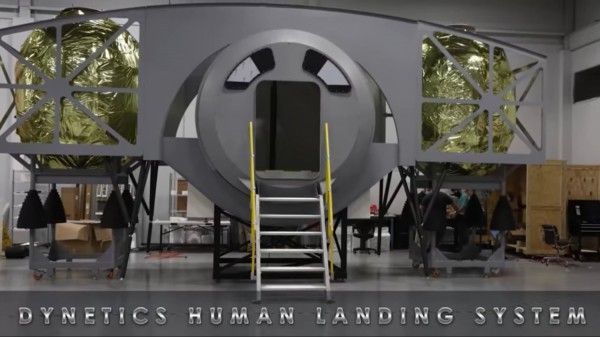 Dynetics is a subsidiary owned by Leidos and has completed building a full-scale human landing system (HLS). According to a press release on September 15, the lunar lander will be evaluated by NASA for the Artemis program.

This low-fidelity prototype includes a crew module, deployable solar arrays, and propellant tanks for lunar descent and ascent. Dynetics vice president of space systems, Kim Doering, said that their team is pleased to bring the system to life and that this reusable and sustainable lunar lander is ready to support a successful and safe hardware delivery for the Artemis program.

NASA is expected to select one or more of the three lunar lander concepts by early 2021 for further testing and development. They want to have at least one of these lunar landers to be up and running by 2024, the time when Artemis 3 program is scheduled to make its historic lunar landing.

Dynetics representatives said that the four-astronaut lunar lander developed by Dynetics has a similar size with the Apollo lunar lander. It will launch atop a United Launch Alliance Vulcan Centaur rocket. They also said that it needs three Vulcan Centaur launches for each mission, one built for the lander and two for its external fuel tanks.

Doering said that the company is planning to launch an unmanned demonstration to show the required technologies, including the off-Earth refueling before Artemis 3 lifts off.

READ: NASA Launches 'Watts on the Moon Challenge' Together with HeroX to Light Up the Moon For Future Lunar Missions

The Artemis program is NASA's effort to send back humans back to the Moon. The creed mission aims to land two astronauts near the Moon's south pole by 2024 and establish a sustainable and permanent human presence on and around the natural satellite of the Earth by 2028.

According to NASA, astronauts of the Artemis mission is set to launch from Earth using the Orion capsule and Space Launch System (SLS) megarocket. But NASA relies on private industries to help them ferry crewmembers from the lunar orbit down to the Moon's surface and back up again.

Over the long haul, the space agency wants these lunar landers to depart from the Gateway, which is a small, moon-orbiting space station. However, Gateway will not be used during the 2024 lunar mission.

READ MORE: This Year's Harvest Moon Is Set to Rise in October

Check out more news and information on the Moon and Space on Science Times.