Wind energy has been around since the time of the Ancient Egyptians, who developed propel boats to travel the Nile River. Today, one of the latest technological advances in wind energy is a "tiny wind turbine" developed by Chinese scientists.

The research paper was recently published in the journal Cell Reports Physical Science. The device is a triboelectric nanogenerator called B-TENG that can harvest wind as sensitive as a gentle breeze.

Their technology exploits the Bernoulli effect or the relationship between pressure and fluid. As fluid velocity increases, static pressure decreases.

The B-TENG is composed of "two interacting triboelectric films with four flapping modes," described the authors, enabling it to work with low flutter wind velocity to generate energy with high efficiency. The device attached to a person's swinging arm can produce enough airflow for the device to generate power, shared the team.

The device is composed of two laminated films and silver (Ag) electrodes that is 1.18 inches by 3.14 inches. The air outlet size is 0.79 by 1.97 in2. The authors explained, "When the two films periodically contacted each other, regularly alternating current was generated because of the difference in the two triboelectric films."

Dr. Ya Yang from the Beijing Institute of Nanoenergy and Nanosystems shared that their goal is to solve issues that can't be solved with traditional wind turbines. They chose low-cost materials for their device unlike wind turbines that use magnets and coils at a fixed cost, he shared. Other issues include resulting noise and aesthetic pollution, noted the study.

Airflow as low as 5.2 feet per second can power the B-TENG but is most efficient when the two plastic strips have synchronized movement between 13 and 26 feet per second. The team has applied the device to 100 LED lights and temperature sensors.

The wind-to-energy conversion efficiency is also the highest compared to other wind turbines at 3.23%. They also created a self-powered monitoring system measuring the flow pressure inside the pipe as well as a self-powered thermometer. 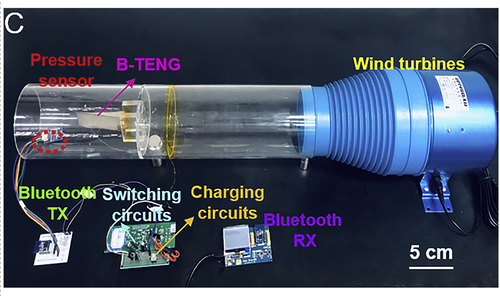 (Photo: The Electric Capability of the Triboelectric Nanogenerator)

The B-TENG can generate enough energy to power security cameras, remote sensors, and a weather station shared Richard Cochrane from the University of Exeter and was not part of the team. Although the B-TENG cannot replace large turbines yet, said Cochrane, the technology can be used to harvest energy in places where electricity is scarce.

One other challenge that Cochrane recognized is the materials can be fatigued over time as it flops back and forth. He inquired how the device would cope "with ice, rain, dust, and salty wind blown in from the sea." It is the same challenge that traditional wind turbines have.

In the study, the authors wrote that "the B-TENG has good reliability and stability" as they tested in both indoor and outdoor environments. The team hopes that someday the B-TENG can be integrated with electronic devices such as phones and eventually compete with traditional wind turbines.

Check out more news and information on Wind Energy on Science Times.