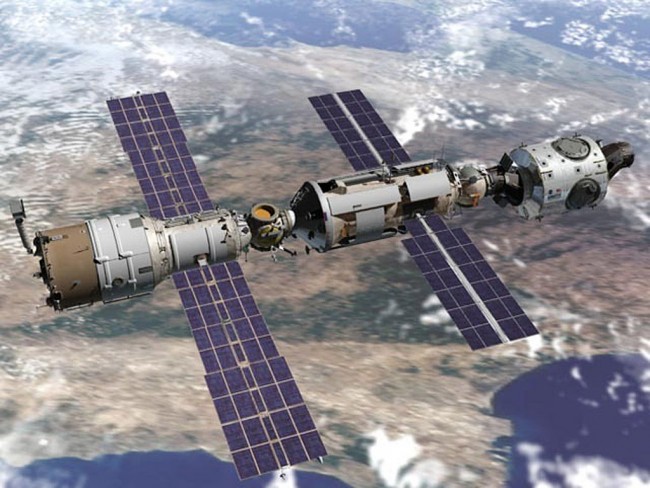 (Photo : Photo by Nasa/Newsmakers) 373260 02: Artists concept drawing of the Russian service module Zvezda docks with the International Space Station in orbit. Zvezda blasted into orbit carried by a Russian Proton rocket from the Baikonur space facility in Kazakstan July 12, 2000 and is scheduled to dock July 26 by computer with two other space station components, Zarya and Unity, both launched in 1998.

Russia has reported that the astronauts onboard the International Space Station has found the air leak, with a senior official saying that the air loss is beyond expected levels.

NASA astronaut Christopher Cassidy and Russian cosmonauts Anatoly Invanishin and Ivan Vagner, all ISS crew members, have been looking for the source of the leak since August. They began with the American segment and have now discovered the source to be from the Russian segment.

Narrowing Down The Source

According to ROSCOSMOS, the Russian space agency, the report comes after analysis and the subsequent search for the source of the leak. In the statement from the agency, they confirmed that the air leak is located in the Zvezda (star) service module, which contains scientific equipment."

Since they have narrowed down the location, ROSCOSMOS said that a search is already underway to pinpoint the exact location of the leak. The Russian space agency assured everyone that the situation at the space station "is not dangerous for the life and health of the ISS crew and does not prevent the ISS continuing manned flight."

Sergei Krikalyov, Russian cosmonaut and current executive director of the nation's manned space programs, said in a televised comment that the ISS routinely loses air from its air purifying system. These air losses are predictable, but according to Krikalyov, this incident is "more than the standard leakage." He adds that if it persists, the ISS will "require supplies of extra air."

"It's not critical in the near future," Krikalyov commented.

At the time of the televised conference, the senior space official said that the ISS crew were resting, adding that they hope that the leak will be found and fixed on Wednesday, September 30.

Late in August, the three ISS crew members were tasked by mission control to find the source of the leak soon after the air loss increased. They first isolated a module of the ISS, locking off the others and conducting leak tests - but to no avail. It soon left two parts of the space station for the next scan: the Poisk Mini-Research Module 2, an access point for docking spaceships, and the launch point for members who will be conducting spacewalks.

The other is the Zvezda Service Module, responsible for maintaining life support for the Russian sector of the ISS.

"With the crew living and working in these modules, it was impossible to achieve the proper environmental conditions necessary for this test," said David Huot, NASA spokesperson, in a statement to Business Insider.

NASA and Roscosmos have been working together to find a window of opportunity to test the remaining modules. They are looking to either find a way for other crew members to isolate the modules safely or finding detectors that will not require the module to be completely sealed off.

The last major leak in the ISS came in 2018 when a Russian Soyuz spacecraft docked onto the ISS was discovered to have a hole 0.08 inches, or 2 millimeters wide.

Also, the ISS is set to welcome its new crew members - NASA astronaut Kate Rubins and cosmonauts Sergei Ryzhikov and Sergei Kud-Sverchkov - once the Soyuz MS-17 carries them, planned for launch on October 14, 2020.