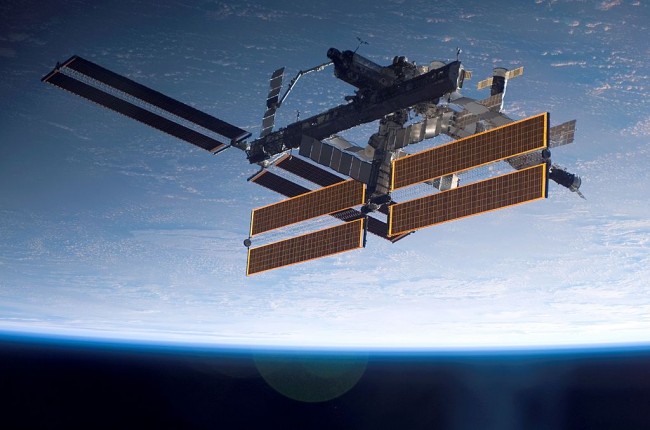 (Photo : Photo by NASA via Getty Images) IN SPACE - SEPTEMBER 17: In this handout photo provided by NASA, the International Space Station is seen over a blue and white Earth, taken shortly after the Space Shuttle Atlantis undocked from the orbital outpost at 7:50 a.m. CDT.

The UMWS results from the space agency's ongoing efforts to find innovative ways to reduce its resupply requirements through efficient use of all its resources - including recovering more water from human wastes.

LAUNCH UPDATE The cargo resupply mission carrying the #Cygnus spacecraft to the @Space_Station has been delayed to no earlier than Thursday, Oct. 1, at 9:38 p.m. EDT, due to poor weather conditions Tuesday and Wednesday. pic.twitter.com/oqN2maQ2m4 — NASA Wallops (@NASA_Wallops) September 27, 2020

An Update to One of the Oldest Astronaut Questions

The new design is 65 percent smaller and 40 percent lighter than existing space toilets, following astronaut feedback regarding "comfort and ease of use." It will feed pre-treated urine into the spacecraft's regenerative system, recycling and collecting water to be reused for other purposes, including the astronauts' drinking water, after additional filtration and processing.

"We recycle about 90% of all water-based liquids on the space station, including urine and sweat," explained Jessica Meir, NASA Astronaut, in an earlier feature from the agency. While shorter missions might not have a strict requirement for reusing water, more extended missions such as the upcoming Mars flight is expected to take up to two years with no opportunities to replenish their water supply.

In space, where there is no gravity, space toilets pull urine and feces away from the body and down into its proper receptacles through the airflow. With the UMWS, airflow automatically starts as soon as the lid is lifted. It was also designed to be more ergonomic for the astronauts using it, reducing clean-up and maintenance required.

A specially shaped funnel and hose are fitted in the UMWS for urine and feces. NASA explains that its unusually small shape is perfect for microgravity environments, to "make sure everything goes where it should."

The traditional thigh straps, intended to hold astronauts in place as they use the comfort room, will now be supported by foot restraints and handholds to allow options and comfort as they respond to their bodily functions.

On the Way to the ISS

NASA noted that a UMWS unit would be included in the Orion multi-purpose crew vehicle as a part of the Artemis II flight test. Additionally, one unit is set to go to the ISS as one of the payloads aboard Northrop Grumman's Cygnus resupply spacecraft. The CRS2 NG-14 will use the Cygnus spacecraft named SS Kalpana Chawla, in honor of one of the seven astronauts who died in the Space Shuttle Columbia disaster in 2003.

The upcoming resupply mission is expected to carry 3,458 kilograms, or 7624 pounds, of cargo to the ISS. Cygnus, a robotic resupply craft, is set to launch on Tuesday, September 29, at 10:27 PM EDT. However, inclement weather has forced a reschedule on October 1, at 9:38 PM EDT. The craft will be lifted by the Antares rocket, also from Northrop Grumman, from the Mid-Atlantic Regional Spaceport, located within NASA's Wallops Flight Facility, Virginia.

Among the payloads included in the Cygnus resupply mission are experimental setups - such as those for identifying cancer therapies, radish seeds to be grown in the ISS, and an inquiry on ammonia oxidation in microgravity. Also, Estee Lauder will be sending its New Advanced Night Repair serum to be photographed as a part of NASA's efforts to support commercial activities at the ISS.