This August, the Lincolnshire Wildlife Park adopted five African grey parrots who lived together in one room. However, Billy, Elsie, Eric, Jade, and Tyson had to be removed from display after the zoo reopened because they've learned how to swear.

The zoo has a total of 200 grey parrots and occasionally have one that learns how to swear. The staff shared how unexpected it was for five parrots to learn profanity at the same time.

In the meantime, after the African greys were caught swearing at visitors, they were put back into isolation. CEO Steve Nichols shared that so far, none of the visitors have reported complaints and have actually been amused by the parrots. "It's brought a big smile to a really hard year," he said.

Nichols also said that laughing at one of the parrots swearing at you may trigger them to repeat their behavior. Although there had been no complaints, the staff is worried about children coming to the zoo and being sworn at by the birds.

The wildlife park is also home to a singing parrot named Chico, who now has his own Instagram page. Chico went viral on social media with his rendition of "If I Were a Boy" by Beyonce.

African grey parrots are among several species that can learn human speech, melodies, and other complex sounds. In a 2015 study, a collaborative study in the journal PLOS One analyzed the unique brain functions of parrots, songbirds, and hummingbirds.

In the study, the team analyzed brain regions associated with vocal learning. Nine parrot specie were involved in the study to compare the genetic expression that affects vocalization. In conclusion, shared the authors, their study demonstrates the song nuclei of parrot species. Their shell regions and larger brain size enable them to have advanced vocal and cognitive abilities compared to songbirds and hummingbirds. 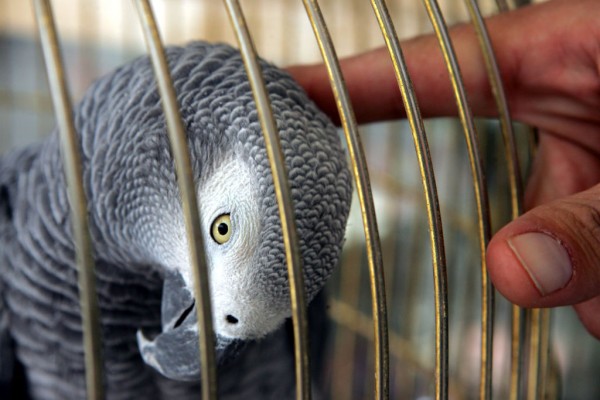 Nichols founded the park after years of helping local residents take care of their pet parrots in his hometown of Sheffield. Soon, he was assisting parrot owners around the world.

The park is still accepting parrots into their National Parrot Sanctuary. All incoming parrots will spend one month under quarantine so that their mental and physical state can be monitored. The 30 days will also help them adjust to the park's feeding schedule and become aware of other colonies before they are released to join the other parrots.

After some time in isolation, the five parrots will be released to different areas of the zoo so they won't trigger each other's swearing habits. The zoo hopes that the five parrots will learn better habits from the other colonies, but if they teach other parrots foul language, the zoo may end up with over 200 swearing parrots. If that happens, said Nichols, "I don't know what we'll do."

Read Also: Animals Can Understand Words and Do Arithmetic Too: Watch Alex the Parrot Do the Math!

Check out more news and information on Zoos on Science Times.