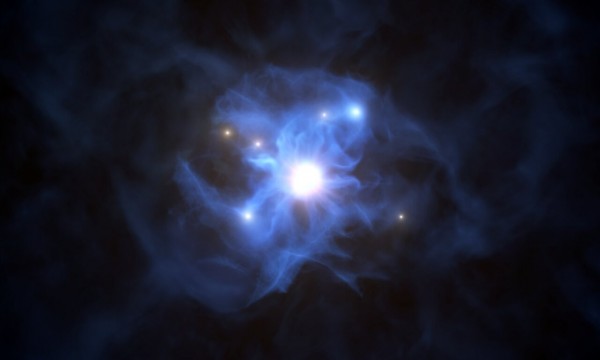 The recent findings have been published in the journal Astronomy & Astrophysics. The supermassive black hole is surrounded by four Lyman-break galaxies or star-forming galaxies and two Lyman alpha emitters or young galaxies typically no older than 600 million years old.

Supermassive black holes are believed to be the center of all large galaxies such as the Milky Way. One theory is they are the result of a chain reaction of massive stars exploding.

Primordial black holes formed after the big bang, some astronomers believe. Other black holes, called stellar black holes, are formed when a massive star explodes and collapses on itself.

Cosmic Web of Galaxies and a Supermassive Black Hole

Astronomer Roberto Gilli shared that the discovery is an important puzzle piece in the history of the Universe after the Big Bang occurred. As stars collapsed to form the first black holes, they may have grown rapidly over time to have masses equal to a billion suns. However, there is still lacking evidence on how supermassive black holes have grown so large.

For the cosmic web-like structure to form, mysterious dark matter may have attracted large reservoirs of gas while the Universe was still young, according to astronomers. Through time, massive dark matter halos and gas formed into web-like structures or large-scale structures (LSS) where galaxy clusters and black holes evolved throughout billions of years.

Upon discovering the web of galaxies and by black hole from VLT's observations, astronomer Barbara Balmaverde believes that they've only "seen the tip of the iceberg." The galaxies surrounding the supermassive black hole were perhaps detected for their brightness, she explained, meaning that there may be more galaxies in the cosmic web.

The Extremely Large Telescope is still under construction but astronomers are hoping that the new instrument will be able to observe more galaxies and black holes from the early Universe.

Check out more news and information on Black Holes on Science Times.