Discovery Suggests a Supernova Exploded Near Earth 2.5 Million Years Ago

Physicists have found evidence of a supernova that exploded relatively close to Earth some 2.5 million years ago.

Researchers from the Technical University of Munich (TUM) in Germany have discovered traces of iron-60 and manganese-53 embedded in the Earth's manganese crust. The manganese isotope was considered by the physicists as definite proof that a supernova explosion did occur. Their findings are reported in the journal Physical Review Letters. 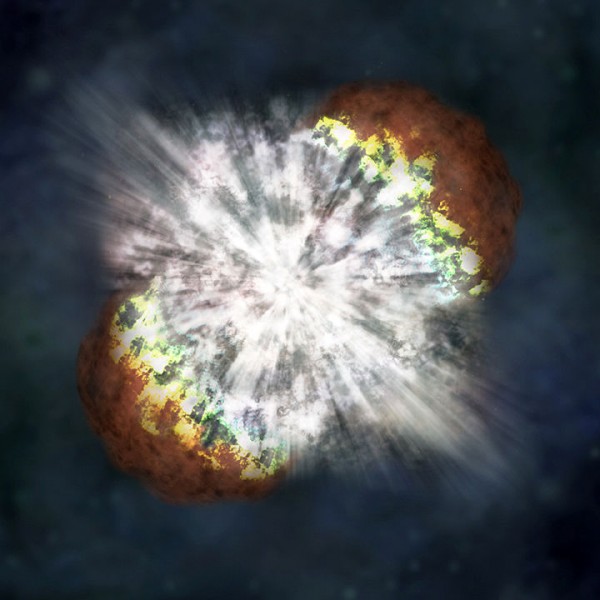 (Photo: Photo-Illustration by M. Weiss/NASA/CXC via Getty Images)
IN SPACE - UNSPECIFIED DATE: In this handout provided by NASA, an artist interpretation illustrates the explosion of SN 2006gy, a massive star in what scientists are calling the brightest supernova ever recorded. Supernovas usually occur when massive stars exhaust their fuel and collapse under their own gravity, in this case, the star could have possibly been 150 times larger than our own sun.

RELATED: Supernovae: Cradles of Creation and Harbingers of Destruction in the Known Universe

A Supernova Explosion's Effect on Earth

When the red giant Betelgeuse started dimming earlier this year, one of the most common theories is that a supernova might be imminent. The explosion of a star such as Betelgeuse would definitely have an impact on Earth. While the team working at the Hubble Space Telescope has explained the cause of the dimming, the TUM researchers confirmed that a supernova did take place near Earth in the past, and its effects still traceable.

Stars like Betelgeuse, which is about 700 times larger than our own Sun, will definitely create a colossal supernova. Explosions of this scale forms and ejects iron, manganese, and other so-called heavy metals across space.

The increased concentrations of manganese-53 can be taken as the "smoking gun" - the ultimate proof that this supernova really did take place," explained Dr. Gunther Korschinek, first author of the study.

According to the researchers, this supernova was far enough not to cause considerable harm to life on Earth. Its proximity, however, was able to cause an increase in cosmic ray levels over several thousand years. Dr. Thomas Faestermann, the co-author in the study, said that this could have led to "increased cloud formation." He also inferred that there might be a link between this event and the Pleistocene epoch, which saw the beginning of the Ice Age some 2.6 million years ago.

Naturally occurring manganese (atomic number 25) is usually made up of a single isotope, manganese-55. The discovered substance by the TUM researchers, manganese-53, is usually found in outer space - mostly in cosmic dust such as those found in the asteroid belt of the Solar System, between Mars and Jupiter.

A press release from the Technological University of Munich explains that cosmic dust usually enters Earth's atmosphere but sometimes arrives in larger specks that glow as in meteorites. Dust and materials that land on the sea are deposited and preserved on the seafloor, keeping these materials in sedimentary rocks and manganese crusts. The researchers then used accelerator mass spectrometry to help remove ions that might affect readings before final detections. Through this process, researchers detected the presence of iron-60 and high levels of manganese-53 in seafloor layers dated to be around 2.5 million years ago.

Korschinek explains that their method uses "investigative ultra-trace analysis." He added: "We are talking about merely a few atoms here," further explaining that the accelerator mass spectrometry is sensitive enough to allow them to determine that the star behind the supernova was somewhere from 11 to 25 times larger than our own sun.

The study also determined that the half-life of the manganese-53 isotope was 3.7 million years, in a measurement procedure that is the first and only one of its kind.

RELATED: Earth Has Been Through Not One But Many Ice Ages

Check out more news and information on Supernovas in Science Times.