The young girl was living in a rundown home together with her parents, Mary Katherine "Katie" Horton and John Joseph "Joey" Yozviak, who have been charged with second-degree child cruelty and second-degree murder. Both parents are also set to face a grand jury. 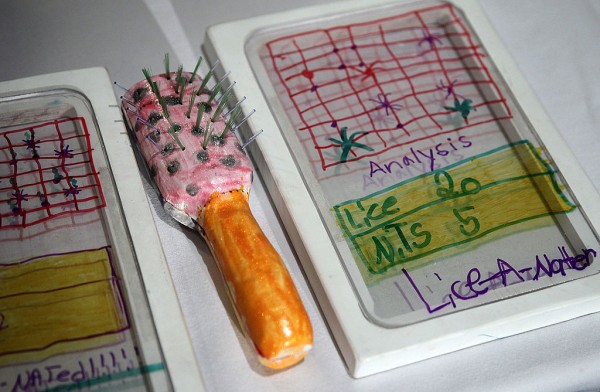 (Photo: Photo by Alex Wong/Getty Images)
WASHINGTON, DC - JUNE 07: The prototype of a second-place winning project -- a Lice-A-Nator, by a first-grader-team of Kingsley Elementary School in Evanston, Illinois, is on display during a showcase event of the Toshiba/NSTA ExploraVision competition June 7, 2013, at the National Press Club in Washington, DC.

According to Ryan Hilton, a Special Agent from the Georgia Bureau of Investigation, medical records showed that Kaitlyn died from cardiac arrest as the main reason. A second cause identified was severe anemia, first reported by local news outlet WMAZ-TV. The state investigators also said that the girl suffered from "excessive physical pain due to medical negligence," though the autopsy results were not yet released at the time.

Hilton testified at the time the child was pronounced dead, describing this case as "the most severe" lice infestation that they had ever seen, estimating it to be recurring for at least three years. Repeated bites from the parasites lowered the iron levels in her blood, most likely causing the anemia that, in turn, might have triggered the cardiac arrest and killed the girl.

Katie Horton also told investigators that her daughter has not taken a bath in about a week and a half leading to the tragedy. Agents who responded to the Yozviak residence in August reported that the house was "filthy and in disrepair," reported the AFP, with vermin covering stuffed animals and furniture in the child's room.

Records from the Georgia Division of Family and Children Services show that two of Kaitlyn's brothers were already removed from the couple's home, citing unsanitary conditions. Kaitlyn was, at one point, placed with a relative, but was returned to her parents six days later.

The New York Times reported that this unusual case raised doubts from the medical and scientific community, with the unlikeliness of death from lice infestation. However, state child welfare specialists note that specifics of the case point underscores deep concerns about the COVID-19 pandemic that has cut children from teachers, counselors, doctors who could have provided support against signs of abuse or neglect, especially at a time when families are facing an economic crisis.

Alejandra Perotti, an invertebrate biology professor from the University of Reading in Berkshire, England, has studied how parasites like lice and mites can help determine the risks of death. She explained that body lice can also carry potentially fatal strains of bacteria. However, head lice require a live host to keep it feeding on blood. She noted, however, that lice killing a person is "an exaggeration."

She notes that a severe lice infestation typically coincides with "serious neglect," which leads to generally deteriorating health conditions. These cases often occur in children or elderly people neglected by their relatives or caretakers.

Dr. Mary Groll, a pediatrician and health sciences professor from North Central College in Naperville, Illinois, said that while there have been a number of cases of children suffering from severe lice infestations, she doesn't know of any deaths from it. She noted, however, that fatal arrhythmia is possible should hemoglobin levels "fell precipitously."

Check out more news and information on Lice in Science Times.