"Powered By Honey": Rolls-Royce Unveils the Bumblebee 5000 From Its Young Designer Competition

British car manufacturer Rolls-Royce has revealed the winner for its Young Designer Competition - a bee-themed car powered by honey to be known as Bumblebee 5000.

The futuristic Bumblebee 5000 was submitted by Sofia, 11 years old, from the United Kingdom. It was a design competition that invited children around the world, providing them with a creative outlet by creating their own "Rolls-Royce of the future."

Rolls-Royce received more than 5,000 designs and blueprints for futuristic vehicles from children from more than 80 countries in the middle of the lockdown from the global coronavirus pandemic.

The design team from the luxury car manufacturers, based at Goodwood, West Sussex, UK, used the submitted drawing and created a 3D model using the same programs they use for actual cars.

Sofia, aged 11 is the UK winner in the #RollsRoyce Young Designer Competition with Bumblebee 5000. Powered by honey, it has beewing doors that open to reveal a buzzing party atmosphere tailored to effortless travel. Many congratulations to Sofia, and all the entrants. pic.twitter.com/BTj3I2mVv3 — Rolls-Royce Motor Cars (@rollsroycecars) October 12, 2020

A "Quite Extraordinary" Entry

In a press release from the car manufacturer, Rolls-Royce Motor Cars CEO Torsten Müller-Ötvös expressed delight in announcing the results of the competition. He noted that the best entries in the contest "didn't just draw 'the nicest car': they created amazing experiences that showed the freedom of their imagination, not hindered by physical, real-world constraints." Müller-Ötvös added: "The winning entry is quite extraordinary." 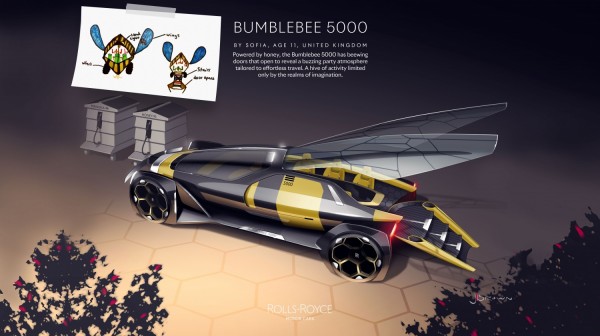 The new Rolls-Royce Bumblebee 5000 is described by its creator as the "very best way to travel in and to have parties in with your family and friends."

"Moving smoothly, it will take you wherever you want to go with style and having fun," the description read. It boasts "comfortable tables and chairs," as well as having a party setup - complete with a disco ball, surround sound system, Wi-Fi, GPS. It is even driverless and equipped with a rear hook for luggage, with Sofia claiming it as "the best option in the automobile market." She adds that the futuristic car changes color depending on the occasion or season of the owner's choice.

She concludes her entry by boldly claiming: "You will never see something like it," a statement Rolls-Royce finds as having the "confidence and certainty" it relates to.

Gavin Hartley, the head of Bespoke Design, explained that they were drawn to the winning entry because it was all about "sociability, having fun, sharing good times and enjoying the finer things in life," explaining that these things are what Rolls-Royce was about. He added that the design reflected the company's interest in the natural world, with Rolls-Royce keeping a colony of a quarter-million English honey bees based at Goodwood.

RELATED: Honey Bee Population Continues to Decline As Insecticide Use Gets Worse

As the winner in the Young Designer Competition, Sofia will enjoy a car ride to school - in a Rolls-Royce, no less, and with its own driver. Additionally, the prestigious carmaker will be donating a complete Greenpower electric car kit to Sofia's school. This kit will allow the winner's school to participate in the upcoming Greenpower design-build-race challenge as well as its motorsport events.

After the instant success of the competition, Rolls-Royce had to extend its original schedule to accommodate other participants. Aside from UK's Sofia, there were other winners from four other categories: technology, environment, fantasy, and fun. For the technology category, 13-year-old Chenyang from China was hailed as the winner with his Bluebird II. Six-year-old Saya from Japan was the winner in the environment category with the Rolls-Royce Capsule. For the fantasy category, the sea-land-air Turtle Car by the sixteen-year-old Florian from France bagged the award. Lastly, the Fantasy category award went to eleven-year-old Lena from Hungary with her Rolls-Royce Glow.

Check out more news and information on Rolls Royce in Science Times.