Before Its First Anniversary, US Space Force to Announce Official Name for Members

Before its first anniversary in December, the United States Space Force has prepared a lineup of announcements - including the official name for its members.

Lt. Gen. B. Chance Saltzman, the Deputy Chief of Space Operation, made the announcement in a live webcast event through the Mitchell Institute of the Air Force Association, October 16. "We're going to roll out some things that will be kind of new to everyone," Saltzman said. 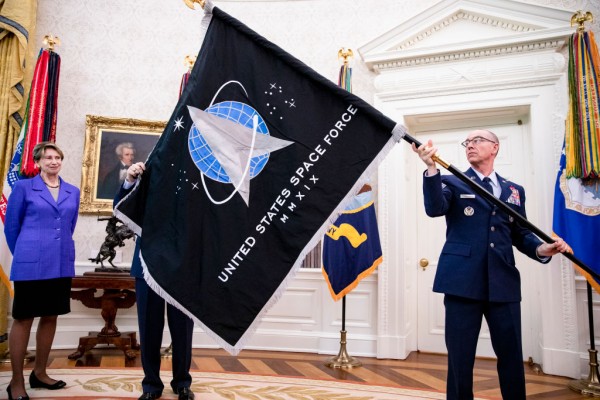 (Photo: Photo by Samuel Corum-Pool/Getty Images)
WASHINGTON, DC - MAY 15: Chief Master Sgt. Roger Towberman (R), Space Force and Command Senior Enlisted Leader and CMSgt Roger Towberman (L), with Secretary of the Air Force Barbara Barrett, present US President Donald Trump with the official flag of the United States Space Force in the Oval Office of the White House in Washington, DC on May 15, 2020.

Among the announcements will be the unveiling of the official name for members of the Space Force. Tracing its origins to the Air Force Space Command, established in September 1982, the space service branch of the United States Armed Forces is organized within the Department of the Air Force - leading to its members adopting the name "airmen" for the time being.

An official name for the space-oriented servicemen is recognized as a significant move in building its own service culture, and potentially attract the next generation of recruits. The creation of its identity, however, has seen a few delays over the past months. A part of  Air Force space operators who are moving to the Space Force has started using the identifier "space professionals."

RELATED: Spacepower is a New Military Might, According to the US Space Force Doctrine

"We are definitely taking too long on many things that maybe could be done faster," Saltzman explained. He added that though there is no "easy answer," the Lieutenant General said that almost every decision made by the agency is "a first of its kind."

"We want to get it right," Saltzman said.

In the live webcast, the US Space Force official also disclosed that General John Raymond, Space Force chief, is laying out a plan in relation to the USSF's first anniversary.

The Future of the Space Force

In line with building its own distinct identity, another setback for the US Space Force ahead of its "first birthday" is the deferment of plans for its own rank structure. Soon after its establishment in December 2019, one of the plans was to provide the Space Force officers and personnel with its own rank and insignia. However, an amendment introduced by Rep. Dan Crenshaw (R-Texas), informally known as the "Starfleet amendment," has required the space branch to adopt the Navy rank structure.

Also, despite its youth as a branch of the United States' Armed Forces, the Space Force has already produced its first batch of enlistees. According to Chief Master Sergeant Roger Towberman, USSF senior enlisted leader, their first seven recruits will be training at Lackland Air Force Base in Texas together with Air Force Recruits - but with certain differences.

The US Space Force schedule has been filled with activities leading up to its first anniversary. Saltzman shared details as to the plans of the military branch in the future. He expressed optimism in having the USSF as a customer of commercially developed satellite communication systems.

"I think there is so much that can be gained by taking advantage of what the commercial sector offers us in terms of satellite communications," Saltzman explained. He noted that instead of developing their own satellites, they can instead focus on the systems and on "how we protect our data."

Check out more news and information on the Air Force in Science Times.