NASA Awards Intuitive Machines to Land PRIME-1 on the Moon

NASA has chosen Intuitive Devices based in Houston to land a water-measuring technology on the moon.

Intuitive Machines has been awarded an estimated $47 million contract by the space agency to send a drill paired with a mass spectrometer to the lunar surface by December 2022.

In America's future, the moon looms big. NASA's Artemis program aims to land American astronauts on the moon by 2024 and create a permanent human footprint on Earth's natural satellite.

"The delivery of the Polar Resources Ice Mining Experiment known as PRIME-1 will help NASA search for ice at the Moon's South Pole and, for the first time, harvest ice from below the surface," explained NASA, in a statement.

The moon's polar ice caps have been garnering lots of interest in the build-up to the Artemis mission, with NASA looking to use them to enable a long-term operation on the lunar surface.

NASA's Associate Administrator for Science Thomas Zurbuchen said the information they will gain from PRIME-1 and other science instruments and technology demonstrations they're sending to the lunar surface would help astronauts better understand how they could an build a sustainable lunar presence.

PRIME-1 will land on the Moon and drill up to 3 feet (approximately 1 meter) below the surface, said NASA in its statement. The new tool will measure how much ice in the sample is lost to sublimation with a mass spectrometer. 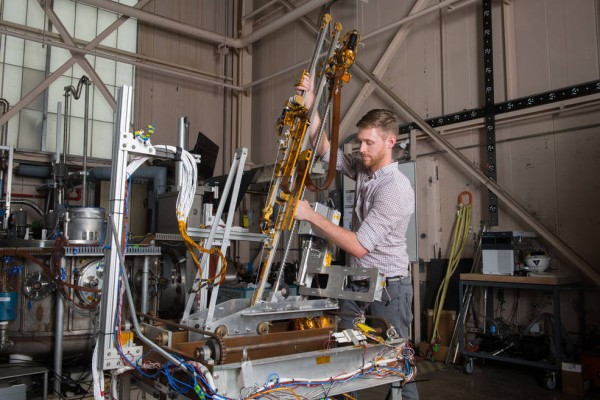 (Photo: NASA)
NASA has selected Intuitive Machines to deliver a drill combined with a mass spectrometer to the Moon.

When Will They Fly?

According to NASA, models of the PRIME-1 drill and the Mass Spectrometer Monitoring Lunar Operations (MSolo) will both be flying on a VIPER mobile robot looking for ice at the lunar South Pole in 2023.

The ice-mining drill is being developed by Honeybee Robotics, based in Pasadena, California. Syracuse, New York-based INFICON and NASA's Kennedy Space Center, on the other hand, are designing the mass spectrometer.

For Intuitive Machines under the CLPS software, this mission will be the second. It received one of the first CLPS task orders in May 2019, for a mission targeted for launch in late 2021. One of those first task orders was also issued by Astrobotic and one in June for the VIPER mission. In April, Masten Space Systems won a CLPS order for a mission to the moon's southern polar areas.

The announcement of the launch of PRIME-1 came two days after a much greater sum of money was awarded by NASA for lunar surface technologies. Via the agency's Tipping Point initiative, the 15 awards to 14 businesses are meant to develop innovations approaching maturity that may benefit the later "sustainable" period of the Artemis program.

In a consortium meeting, NASA Administrator Jim Bridenstine said the space agency would undergo a "transformational" change for exploring space.