Some of the world's smallest species help researchers indicate the effects of climate change, such as microbes, bees, and other bugs. Researchers from the University of Colorado, Boulder reveal how the small flour beetle has enabled the team to make ecological models to predict the future of nature.

The study was published in the journal Proceedings of the National Academy of Sciences. The researchers analyzed how invasive species spread and adjust to climate change and the competition between species.

The team studied the competition between the two flour beetle species Tribolium castaneum and Tribolium confusum, revealing how expansion into new territories slows over multiple generations. Competing species also play a major role in the expansion of natural systems.

Geoffrey Legault explained that their findings show how competing interspecies can result in an increased risk of extinction. Studying the flour beetle species helped improve their ecological models to have accurate predictions about how ecosystems change.

Since the 1900s, flour beetles have been a model organism in ecology the same way that fruit flies are often used for genetic studies. The behavior of the beetles represents the basic ecology of other organisms.

Their response to lab experiments is also used for larger trends and patterns in natural ecosystems. The natural habitat of flour beetles consists of tree barn and leaf litter on the ground.

During the study, plexiglass boxes were combined for the beetle colony with each species born on opposite ends. Through time, the team observed how they expanded their territory and competed against each other.

Brett Melbourne explained that their experiment was a microcosm of the natural world that enabled them to observe the processes of birth, death, and movement of the flour beetles. Legault shared that they even sift the flour for the beetles like you would in a bakery.

Flour is both the beetle's source of food and habitat. They are considered a major product pest that invades shelves of flours in stores, at homes, and grain silos and mills in factories. Typically, studies involving flour beetles focus on how to exterminate the pests.

One of the challenges the team had was that the beetles have a very short life cycle. Within a year, they grew several generations of the beetles in the lab and were assisted by more than 20 undergraduate students to help count over a million beetles.

Melbourne shared that one way the flour beetles are affected by climate change is the movement of their habitat. "It's either going up mountainsides or it's moving toward the poles."

Many global habitats are moving northward more than half a mile every year. Melbourne explained that the pace of movement is too fast for species with limited ability to change their habitat.

For example, species migrating to new areas will encounter other species that are already established there. If two species rely on the same resources, their survival is threatened. Experiments on species interactions are critical "for the long-term persistence or extinction of species in response to moving habitats." 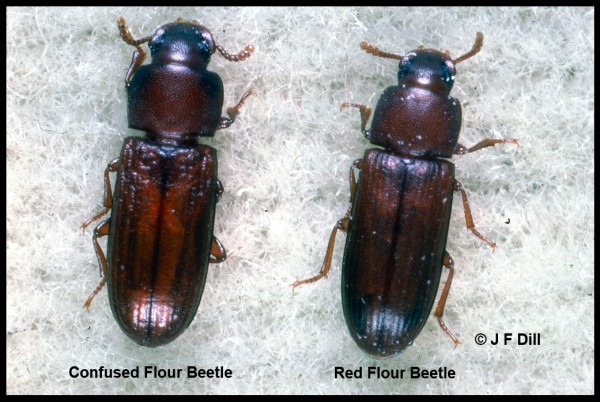