Silica-based distributed fiber-optic sensor (DFOS) systems have been typically used for infrastructures such as bridges, highways, and buildings designs to withstand pressure, humidity, and natural disasters such as earthquakes. In a recent study, researchers applied the same technology for biomedical robotics.

In 2016, Robert Shepherd's Organic Robotics Lab developed a soft robot that had touch sensitivity using stretchable optical waveguides. The technology is inspired by human "sensors ...integrated within the body." At the time, the team was unable to localize where the sense of touch was coming from.

"By monitoring changes in the color and intensity," the authors wrote in the new study, the robots accurately distinguish stimuli movements such as bending, stretching, and localized pressing in real-time. This could change the future of prosthetics to have a more realistic sense of touch.

Hedan Bai explained that previous types of stretchable sensors could not tell the difference between output types like finger movement compared to the pressure on the palm. For the materials to be useful in biomedicine, machine learning algorithms are needed.

Medical robots typically use vision to make measurements, said Shepherd "We know that soft matters can be deformed in a very complicated, combinational way, and there are a lot of deformations happening at the same time."

To get past technical limitations, the team incorporated light sensors from DFOSs with stretchable electronics and soft robots to build a sensing glove. The glove has dual-core elastomeric optical fibers that measure dynamic movement and contains patterned dye regions simultaneously. Both cores also have a red-green-blue sensor chip. 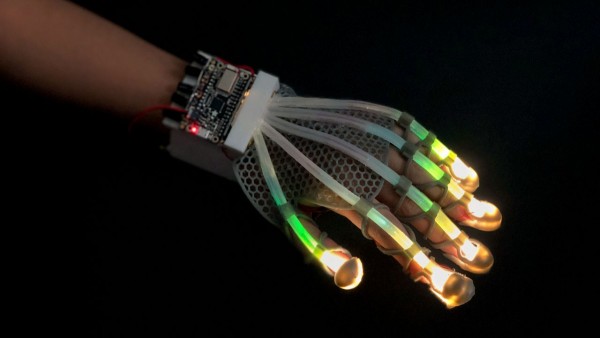 (Photo : Cornell researchers in the Organic Robotics Lab designed a 3D-printed glove lined with stretchable fiber-optic sensors that use light to detect a range of deformations in real time.)

Measuring light intensity in color enables the team to make accurate measurements of various movements without using machine learning algorithms. The three-dimensional-printed glove they developed contains a stretchable light guide for multimodal sensing (SLIMS) fibers for each finger to monitor the wearer's movement. It's like using vision to measure touch, explained Shepherd.

Clear light passes through the dual-core when there is no movement. When a finger moves, the glove lights up in different colors indicating the location and types of movement. The information is then sent to a computer through Bluetooth which creates a real-time motion model.

Adding the Sense of Touch to AR and VR

Bai said that their technology could be used in biomedicine for measuring stimuli that patients feel in major organs. Aside from applications in biomedicine, the team is studying how the SLIMS sensors can enhance virtual and augmented reality (VR/AR) systems.

Although AR and VR are based on motion experiences, said Shepherd, "touch is barely there at all." Later on, an AR simulation won't only instruct wearers how to change a tire, but can also measure the pressure and motion necessary to complete the task.