Last year, Vice President Mike Pence presented plans for NASA to bring back astronauts to the moon by 2024. To date, a new report says, "the space agency will be 'hard-pressed' to do so.

In a report, the NASA Office of Inspector General has noted that the 2024 timeline, in particular, for the Artemis moon mission is exaggeratedly "ambitious," referring to concerns about the funds, scope, and timetable.

With the multiple problems mentioned, the report indicates, "We believe the agency will be hard-pressed to land astronauts" on the moon towards the latter part of 2024.

At the very least, the report continued achieving a schedule near the so-called ambitious goal, and landing on Mars in the 2030s will need robust, unswerving, and sustained leadership not just from NASA, but from the president and Congress, as well, not to mention, timely and stable funding. 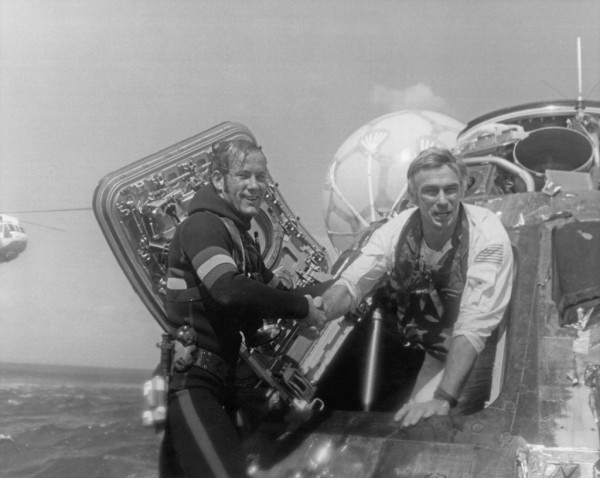 (Photo : NASA/Getty Images)
NASA astronaut Eugene Cernan, Commander of the Apollo 17 lunar mission, is welcomed back to Earth by a US Navy Pararescueman, after splashdown in the Pacific Ocean, 19th December 1972.

Also, according to the report, over the last 10 years, their oversight work has found the agency constantly struggling to deal with each of the significant issues mentioned, as well as the fast-tracked timetable of the Artemis mission will likely further worsen such challenges.

The findings alluded to particular issues with the Space Launch System rocket and the Orion crew capsule, both of which have seen their progress either delayed or suspended because of the COVID-19 crisis.

In March this year, a news report said, this global health crisis could slow down the planned return to the moon of NASA. Currently, COVID-19 has infected over 11 million and killed more than 250,000 Americans.

Specifically, Fox News reported that the plan of NASA to go back to the moon in 2024 via its "Artemis program" could be in danger because of the COVID-19 pandemic, upending the globe.

In mid-March, Jim Bridenstine, NASA Administrator, announced that the Michoud Assembly Facility, as well as the Stennis Space Center in New Orleans and Mississippi, respectively, would be moving to Stage 4, effective March 20, closing all facilities and forcing "mandatory telework.

Meanwhile, the same March report said, the hardware system that would be used to bring astronauts back to the lunar space was suspended.

NASA to Receive Less Funds for its Development of Lunar Lander

The recently-released report noted, too, that NASA is scheduled to receive considerably less money to start the development of a lunar lander.

In September, Bridenstine said, the entire $28 billion NASA requested is needed for the Artemis moon program. Of the amount asked for, $7.6 billion is allotted for the Space Launch System rockets.

Some $16. 2 billion is designated for the "initial human landing system," including the development, testing, and launch of the new lunar landers.

Earlier this year, Congressman Kendra Horn, D-Okla., proposed a bill urging the agency to consider a 2028 deadline for returning US astronauts on the moon to boost NASA's long-term plans for its crewed exploration on Mars.

A successor to the Apollo program, the Artemis program, is famous for a number of reasons, which include the goals of sending the very first woman to land on the lunar surface, not to mention launching a sustainable presence of humans on the natural satellite of Earth.

At present, only 12 all-American people have landed on the moon. The most recent NASA astronaut to land the moon was Apollo 17 Mission Commander Gene Cernan in 1972.