Space Race for Moon and Mars May Cause Conflict

The first race in space was a competition for national prestige and strategic advantage between the US and the Soviet Union. NASA is now farming out missions to private corporations. Other nations, particularly China and India, have joined the chase. For several countries, the moon and Mars remain tantalizing targets, as are the scientific advancements that can be found on space travel.

At the latest meeting of the United Nations Committee on the Peaceful Use of Outer Space, the countries noted with alarm that it is more necessary than ever to "prevent outer space disputes and conserve outer space for peaceful purposes.

The future of space may look more like the recent launch to the International Space Station of NASA's SpaceX Crew-1 flight. US and Japanese astronauts were on hand, replacing the Russian and US crews already living on the ISS. The competitive, cooperative, and commercial essence of space was once again plain for us to see as the Falcon 9 rocket flew into space. 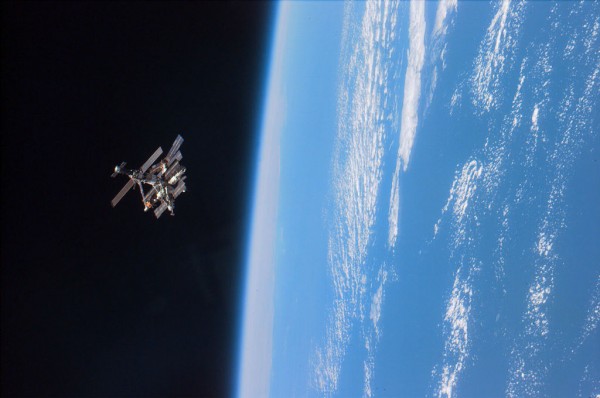 (Photo : NASA/Newsmakers)
383927 03: FILE PHOTO: STS-79 astronauts enjoy this view of the Mir complex backdropped against the blackness of space over Earth's horizon. A thin blue line of airglow runs parallel with Earth's horizon, September 24, 1996. Mir is nearing the end of its existence as Russia plans to steer the craft out of orbit in late February 2001 in a controlled crash to dump the space station safely into the Pacific Ocean.

Since the program for the space shuttle concluded in 2011, NASA, including the US. It is well established that the National Aeronautics and Space Administration depended on Russia to ferry US astronauts to the International Space Station, which has been circling Earth for two decades. That changed when Elon Musk's SpaceX flew the first crewed missions in 2020, propelled by reusable boosters that drastically lowered launch costs.

The Starliner by Boeing Co., a new astronaut capsule planned to operate on an existing Atlas rocket, is undergoing orbital trials and will even fly to the ISS in 2021. SpaceX launched the first private resupply run in 2012. What has improved is that the expense of accessing space is being pushed down by SpaceX and other firms, including Richard Branson's Virgin Interstellar Holdings Inc. and Blue Origin, operated by Amazon.com Inc. founder Jeff Bezos.

For Axiom Space Inc., which intends a private orbital space station, SpaceX already has a deal to transport four astronauts in 2021 and has the arrangement to send a Japanese billionaire and his guests around the moon as soon as 2023.

Countries In the Race

In 2019, China landed a rover on the moon and initiated a mission to return there and gather samples in late 2020. It also aims to create, with its own astronauts, a lunar research center.

A second uncrewed moon landing is expected by India in 2021, after their first try failed in 2019. It also has astronauts preparing onboard an Indian spaceship, Gaganyaan, for a scheduled orbital mission.

In 2019, the United Arab Emirates launched its first astronaut on a Russian rocket, dispatched a rover to Mars in July 2020, and aims to dispatch an uncrewed spacecraft to the moon in 2024. The European Space Agency has solar system observation probes and is designing a lander for the moon.

To The Moon And Back

Almost half a century back, Americans have stepped on the moon. The US and other nations are already involved in going back. That's because, coupled with developments including image sensors for cell phones, the drive to the moon in the 1960s propelled leaps in aerospace technology.

Since then, research developments imply that a return would potentially yield fresh insights into the history of the moon and the solar system. National patriotism, along with a drive to advance the commercialization of space, has inspired the programs. According to the Planetary Community, the U.S. Apollo mission that carried the first men to the moon in 1969 cost $25.8 billion, or around $260 billion in inflation-adjusted terms.

A craft propelled by the latest Space Launch System rocket will dock on a lunar orbital platform, housing four-person crews for up to three months, under NASA's existing proposals to return to the Artemis program this decade. From there, astronauts will fall to the earth, where minerals could be extracted and supplies tapped for oxygen, water, and rocket propellant output. A refueling module will service the space station, including Mars flights. Blue Origin separately has its own proposals for a base on the south pole of the moon.

The laws that link to the strategic usage in space need to be recognized, respected, and strengthened to ensure that the delicate and common outer space realm should not become an area for war.

Failure to do so could result in devastated, damaged, and impacted civilian lives, especially in the largest and most influential countries, such as the US, whose economies and populations rely heavily on space infrastructure.

They have been granted the greatest competitive benefit by their proximity to space and the most insecure if that access is breached.

Space is a 'congested, disputed and competitive' region where there is a collision of technological, commercial, and economic priorities and military and national security issues.

In this way, space is like a continuum of radio frequencies that has been effectively controlled and operated for decades under the international standards introduced by the International Telecommunication Union.

But space is far more than that too. There are major advantages when nations work together and collaborate, as the latest Crew-1 mission proved.

The only practical path forward is enlightened leadership, led by widely accepted rules and standards and an understanding that we are sharing outer space as custodians for future generations.