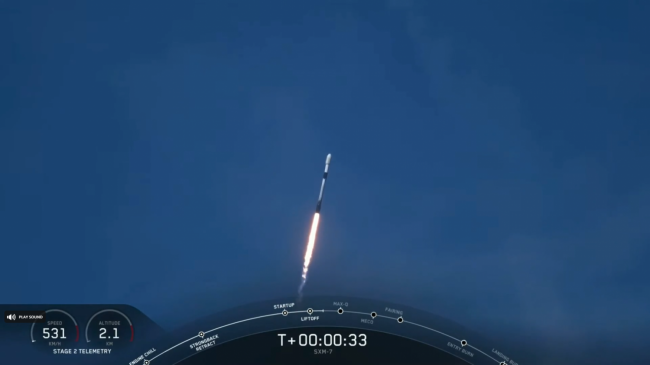 Last Friday, December 11, SpaceX has called off the launch of a Falcon 9 rocket carrying the massive radio satellite for Sirius XM to space for extra system checks, according to their Twitter post.

The Falcon 9 rocket was only 3 seconds away from liftoff at 12:55 pm EST from the Space Launch Complex at the Cape Canaveral Space Force Station in Florida, Space.com reported. SpaceX said that they plan to reattempt a launch on Sunday, December 13, at 7:13 am EST.

On a follow-up report by Space.com, SpaceX has finally launched the veteran Falcon 9 rockets carrying the SXM-7 satellite for radio provider Sirius XM on Sunday, December 13, and nailed a successful landing on its return to Earth.

Instead of the initial plan to launch Falcon 9 at 7:30 am EST, the veteran rocket launched into space at 12:30 pm EST which makes it the 25th launch of SpaceX this year, and the seventh mission of Falcon 9. The mission is the first one of two satellites to be launched by SpaceX for Sirius XM which aims to replace the old ones currently in orbit.

The first stage of the rocket returned approximately nine minutes later which successfully landed on the SpaceX drone ship, named "Just Read the Instructions," in the Atlantic Ocean. Also, it marks the 69th recovery of a first stage booster for SpaceX.

The rocket called B1051 is the second rocket of SpaceX to have reached seven missions. The first one was rocket B1049 which ferried a batch of 60 Starlink satellites into orbit on November 24 before landing on the "Of Course I Still Love You" drone ship.

So far, B1051 has carried unmanned Crew Dragon spacecraft to ISS as part of the flight test in 2019, then a trio of Earth-observing satellites for Canada, followed by four different Starlink missions, according to Space.com.

This is their seventh mission which carries the satellite for Sirius XM that will beam down over 8,000 watts of content to all Sirius subscribers in the US, Canada, and the Caribbean.

The flight on Sunday has proven that companies prefer hiring veteran rockets. In the past, SpaceX reserved the boosters of over three flights for their ow Starlink missions but the recent flight has shown that customers are trusting the reusability of the tried-and-true boosters.

Moreover, it also signals the first time SpaceX flying a used piece of a payload for its customers. SpaceX has been upgrading the reusability of its rockets over the years to include more rockets in its future endeavors.

The California-based rocket manufacturer has two boats with giant outfitted nets to facilitate rocket reuse, called the GO Ms. Tree and GO, Ms. Chief. The boats will catch the falling pieces of the rocket or scoop them out of the ocean to bring them back to the port and reuse them for the missions.

But for the recent launch, only GO Ms. Tree was available because GO Ms. Chief was still in Port Canaveral.