Japan has chosen the word "mitsu" for its 2020 "Kanji of the Year," which appeared in its government campaigns to enforce social distancing in response to the global coronavirus pandemic that has largely shaped this challenging year.

Following the results of a public poll hosted by the Japan Kanji Aptitude Testing Foundation, the kanji or logographic character for "mitsu" topped the survey with 28,401 votes, or 13.65%, out of 208,025 votes cast.

The choice for the "Kanji of the Year" was unveiled at the 26th year-end event hosted by the Kyoto-based academic organization in the city's Higashiyama Ward. Chief Buddhist priest Seihan Mori from Kyoto's Kiyomizu Temple ceremoniously wrote the chosen kanji on a traditional Japanese paper measuring 1.5 by 1.3 meters. 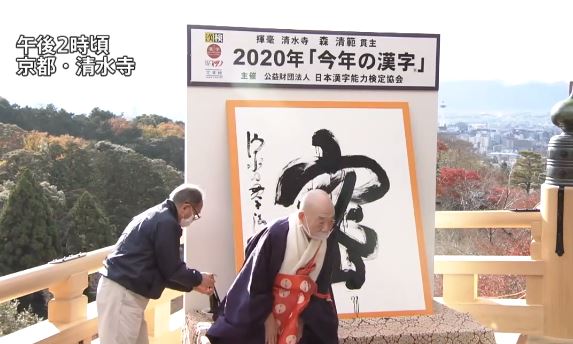 "Mitsu" is a Japanese character that may mean "dense" or "closes" and has been used by the Japanese government and health officials to remind people of social distancing in the middle of the pandemic. The widely-used slogan, "avoid sanmitsu," or avoid three mitsus, urged the public to stay away from "confined spaces with poor ventilation," "crowded places with many people," and "close-contact settings like close range conversations."

RELATED ARTICLE: Viral Video from Japan Shows How Fast Coronavirus Can Spread at a Restaurant

The Japan Kanji Aptitude Testing Foundation explained that the pandemic most likely grove the public into voting for the kanji, with the character accurately encapsulating the year's mood. However, other voters chose the same character because it also means "secret" in the language, explaining the uncovering of secrets in politics and the entertainment industry exposed in the previous months.

On the other hand, some votes for "mitsu" come from its more positive meanings, especially "closeness," as the pandemic and the year, in general, has allowed them to form closer connections with friends and loved ones.

Following "mitsu" is the kanji for "ka," a more straightforward character that refers to epidemic, misfortune, and evil in general, with 13,655 votes. "Yamai," the term for "illness," rounds the top three with 10,369 votes.

Japan's Campaign Against the Coronavirus Pandemic

Japan's response against the global coronavirus is widely commended, especially among the developed world, since it managed to post one of the lowest death rates per capita - despite its large older population.

In a review of the East Asian nation, published in a commentary in the EMBO Molecular Medicine journal last May 2020, multiple factors are found to have contributed to Japan's significantly lower casualties to the highly contagious disease.

In terms of government response, the Japanese government swiftly adopted a containment-focused policy that worked to repatriate its own citizens from Wuhan, China - identified as the point of origin of the COVID-19 pandemic, as well as tight border regulations. By the end of January, Japan has already established its "Novel Coronavirus Response Headquarters," a task force including members from different Japanese ministries.

Additionally, the EMBO commentary noted the Japanese government's three-pronged approach that included early detection and response to infection clusters, early patient diagnosis and enhancement of intensive care - including a medical service system for patients, and behavior modification of its general citizenry, which included the "avoiding summits" campaign.

Check out more news and information on Japan on Science Times.