In southern Mississippi, NASA's Stennis Space Center bore witness to a second attempt to complete a crucial propellant-filling and countdown demonstration test for the Space Launch System (SLS) last December 18. For the first time, a core stage of the rocket was fully loaded with fuel for testing.

On December 7, a first attempt was thwarted by issues involving ground-controlled heaters. The said device was triggered before propellant loading could begin.

Another reason why they terminated the initial attempt to fill the rocket stage with fuel was because the liquid oxygen (LOX) they used was not cool enough when it entered the rocket. This prevented a complete test from being performed.

The target of the countdown dress rehearsal was to determine launch windows and last-minute troubleshooting. NASA would not confirm, but if all goes well, the stage's flight-duration test will take place sometime after the holidays in January. 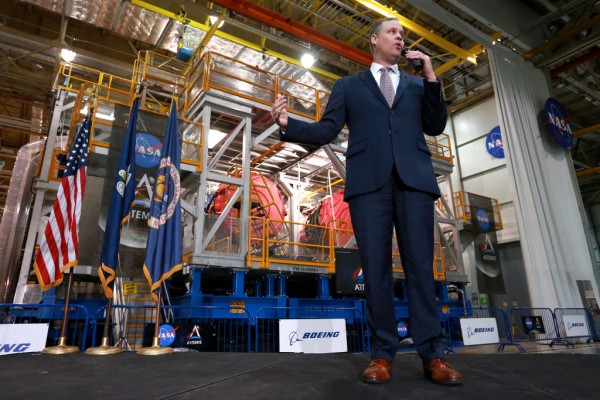 (Photo : Photo by Sean Gardner/Getty Images)
NEW ORLEANS, LOUISIANA - DECEMBER 09: NASA Administrator Jim Bridenstine speaks to the media while displaying the Space Launch System (SLS) complete core stage for the Artemis 1 Moon Mission during Artemis Day at the NASA Michoud Assembly Facility on December 09, 2019 in New Orleans, Louisiana. Artemis 1 is the first in a series of complex missions that will enable human exploration to the Moon and Mars.

NASA SLS Core Stage Propulsion Lead Jonathan Looser said they are trying their best to run the same process during the Hot-Fire level, which is the "same sequence that we'd run on the launch pad," with the addition of a few new goals and then the detanking.

The propellant tanks will be fuelled. Afterwards, the research team will countdown to T-0, and the machines will work the final pre-launch sequence in this complete rehearsal for the Hot-Fire test.

This WDR countdown will be paused with a little more than 30 seconds remaining on the clock with the platform and its Aerojet Rocketdyne RS-25 engines ready.

The ground and vehicle computers will then secure the vehicle, and at the beginning of the terminal countdown, the test team will recycle the live stage back to its setup.

The engineers can continue with the "hot-fire" test if the data looks fine.

With two smaller boosters strapped to the arms, the SLS rocket consists of a massive center stage. At its foundation, the four efficient RS-25 engines are the same type as the now-retired space shuttle orbiter used.

The launcher supplies the raw power needed for Orion to be launched into space and then hurled to the Moon.

A part called a clutch on one of four pre-valves that supply liquid hydrogen to the RS-25 engines was removed and replaced by engineers at Stennis last month. During tests, the pre-valve had shown uneven performance.

To hold the SLS on schedule for its November mission, officials are expected to ship the giant core to its launch location at Florida's Kennedy Space Center by January 14.

NASA said last week that the ARTEMIS-1 project was still on schedule for its November 2021 flight.

The Green Run has mostly progressed smoothly; owing to Covid-19 there was a five-week stop. Furthermore, owing to tropical storms, construction at the site had to be shut down six times, given the especially busy hurricane season.

Some Stats Regarding the Rocket