The National Aeronautics and Space Administration (NASA) has recently revealed its plan to meet its target of landing "the first woman and the next man on the surface of the Moon" by 2024 - but it will cost approximately $28 billion.

"With bipartisan support from Congress, our 21st-century push to the Moon is well within America's reach," said Jim Bridenstine, NASA Administrator, in an accompanying press release, September 22. He added that the agency has continued to refine both its budget and architecture.

Under President @realDonaldTrump, @NASA revived American human space exploration as we work to put the first woman on the Moon & the first man & woman on Mars! The Artemis Plan shows we're on our way to this goal as we restore American leadership in space! https://t.co/Y75KKMIMtZ — Mike Pence (@Mike_Pence) September 21, 2020

Funding Requirements Over a Five-Year Period

In the Artemis Plan document, it notes that the estimates cover requested funding for its Exploration Systems Development, the Artemis I to III missions, the Human Landing System (HLS), and more. From the fiscal year 2021 to 2025, the total estimate is at $27.971 billion, with more than $16 billion going to the lunar landing module or the HLS.

According to an article from Spaceflight Now, Bridenstine recognizes the challenge that is the "political risk" in a press briefing Monday, September 21. He cited projects that go too long, cost too much, and those that get cast out later. He also added that programs developed over longer schedules tend to generate higher overall costs.

"So to save money, and to reduce political risk, we want to go fast ... 2024 is an aggressive timeline," the NASA Administrator said. "Is it possible? Yes. Does everything have to go right? Yes."

Jim Bridenstine also explained that if the Congress approves $3.2 billion for the lunar landing module, then the agency is still "on track for a 2024 moon landing." However, he warned that if March 2021 comes around without the funding for the Human Landing System, the task "becomes increasingly more difficult."

To summarize, Bridenstine told members of the media: "If Congress doesn't fund the moon landing program, then it won't be achieved." 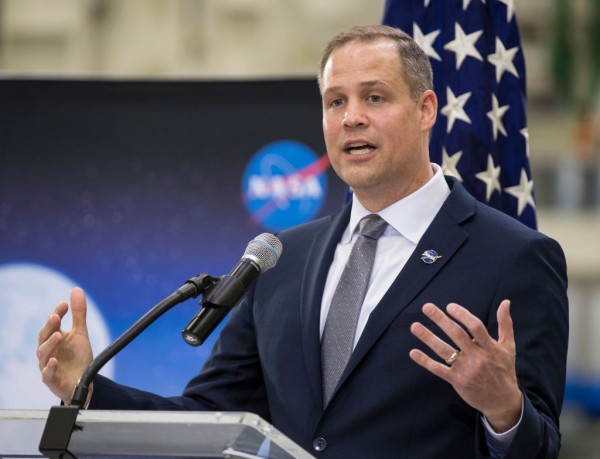 (Photo: Photo by Aubrey Gemignani/NASA via Getty Images)
CAPE CANAVERAL, FL - MARCH 11: In this handout photo provided by NASA, NASA Administrator Jim Bridenstine talks to employees about the agency's progress toward sending astronauts to the Moon and on to Mars during a televised event at the Neil Armstrong Operations and Checkout Building at NASA's Kennedy Space Center on March 11, 2019, in Cape Canaveral, Florida.

Also detailed in the Artemis Plan document are the progress made in the American-made super heavy-lift rocket, the Space Launch System (SLS), and the Orion spacecraft - set for a critical hot fire test later this fall. Should the core stage pass the test, it will be integrated with the Orion at NASA's Kennedy Space Center, located in Florida.

The first mission, Artemis I, is an uncrewed mission set in 2021 that will see the launch of both the SLS and the Orion on flight tests around the moon: analyzing the craft's performance, life support, and communication capabilities.

It will be followed by the Artemis II mission, which will first feature a proximity operations demonstration. This test will have astronauts manually pilot Orion as soon as it disengages from the interim cryogenic propulsion stage (ICPS). The second Artemis mission is expected to fly in 2023, carrying its crew of astronauts.

By 2024, NASA will be working to return mankind to the surface of the moon. Artemis III is looking at a South Pole landing site. After being lifted by the SLS, the Orion spacecraft will carry two astronauts 240,000 miles to orbit the moon. They will be carried by one of the three commercial HLS currently in development - one is from Jeff Bezos' Blue Origin, another from Elon Musk's SpaceX, and the third from the Huntsville, Alabama-based Dynetics.