Though fiber optic cables have made communication and data transmission even faster than previously possible, it is still subject to physical limitations and data losses. A new study has found a way to reduce signal losses from glass-based fiber optic cables.

Researchers from Penn State in the US and AGC Inc. in Japan propose that the silica used in these cables' manufacture be fabricated under high-pressure conditions. 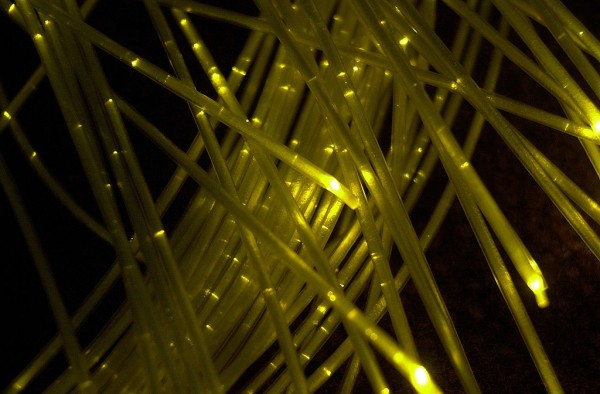 RELATED ARTICLE: World's Fastest Internet that Lets You Download 1,000 HD Movies in One Second is For Real!

"Signal loss means that we have to use amplifiers every 80 to 100 kilometers (50 to 62 miles)," said John C. Mauro, materials science and engineering professor at Penn State, in a press release. He adds that past that distance, signals are no longer "detected properly," which becomes a significant problem across continents and oceans.

The inevitable signal losses in glass fibers are due to Rayleigh scattering - the scattering of light and other forms of electromagnetic radiation, because of imperfection in the medium's atomic structure. Mauro notes the random presence of open porosity, or gaps, in the atomic scale. Strands used in the construction of fiber optic cables are from ultra-high purity silica glass.

"Historically, the biggest breakthrough was the discovery that led to the original optical fiber - how to get rid of the water in the glass," Mauro added, noting the presence of water. It absorbs the signal, especially those under frequencies commonly used for telecommunication. But with a specialized technique based on chemical vapor deposition, water can be removed from the silica fibers.

Existing techniques for the manufacture of fiber optic cables are done close to ambient pressure conditions.

Investigating the Effects of Pressure on the Manufacturing Process

Researchers conducted molecular simulations to investigate the effects of pressure in the fabrication process, with the results of their study reported in the NPJ Computational Materials journal. According to the simulation, more than half of Rayleigh scattering losses could be cut down by pressure quenching the glass.

The report explains that applying additional pressure to the material makes it less heterogeneous. It also decreases the gaps in the atomic scale - making the material more homogenous and less porous.

While the Penn State team worked on simulating the increased pressure on the glass, Madoka Ono led the actual testing on silica glass batches and found that the results confirmed the simulation. Ono is affiliated with AGC Inc's Materials Integration Laboratories and is an associate professor at Hokkaido University's Research Insitute for Electronic Science.

Mauro said in the Penn State release that the optimum pressure was around four gigapascals (GPa). However, it is not a straightforward improvement for the fiber optic manufacturing process. To manufacture under these extreme pressures, the would have to be formed and cooled under pressure during its glass transition phase - when the glass is in between its solid and liquid phases and appears as a viscous material. It would require a specialized chamber that can hold 40,000 atmospheres of pressure.

Check out more news and information on Fiber Optics on Science Times.