Researchers report a newly-discovered miniaturized genus and species of the snake from a biodiversity collection, December 23.

Specimens for the Waray Dwarf Burrowing Snake (Levitonius mirus) was first collected from its native habitat, the Samar and Leyte islands in the Philippines. Since these were the first reported sightings of the snake, in 2006 and 2007, they were misidentified and added to the preserved collection of the University of Kansas Biodiversity Institute and Natural Museum. 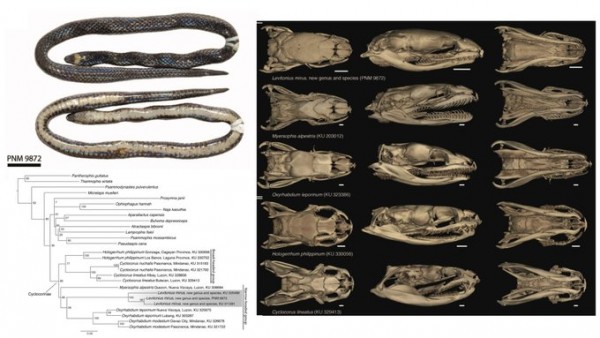 The snakes remained unidentified, even as additional samples were found in 2014. However, Kansas University graduate and Biodiversity Institute assistant Jeff Weinell re-examined the samples, looking at the snakes' genes via molecular analysis. He then forwarded his findings and the samples to collaborators from the University of Florida, who conducted CT scanning.

Now Weinell is the lead author on a paper that describes the Waray Dwarf Burrowing Snake, reporting it as both a new genus and a new species in the journal Copeia.

He shared being familiar with Pseudorabdion, a group of small and burrowing snakes, and how some of them are found in the Philippines. Weinell then made a list of specimens in the museum under that group, sequencing the DNA for available tissues.

Once he got the molecular data back, Weinell discovered that the sample was not a part of Pseudorabdion. Aside from this realization, the challenge is pinpointing its actual classification since the Philippines is made up of more than 7,000 islands, containing more than a hundred species of land snakes from 41 genera and 12 different families.

"It was supposed to be closely related, but it was actually related to this entirely different family of snakes," Weinell added. Upon closer inspection, he further confirmed that it was a different species.

Together with Rafe Brown, ecology and evolutionary biology professor and the curator-in-charge of the Biodiversity Institute, and other colleagues from KU, the University of Florida, and the University of Oklahoma, they discovered that the Waray Dwarf Burrowing Snake belongs to a "new miniaturized genus" and species of snake.

Weinell explained that the name of the new species, Levitonius mirus, came from Alan Leviton - a California Academy of Sciences researcher who has spent decades studying snakes in the Southeast Asian archipelago. While "Levitonius" is in his honor, "mirus" is Latin for "unexpected," in a nod to the nature of its discovery - from being misidentified and getting surprising DNA sequencing results.

"In this case, the trained 'expert field biologists' misidentified specimens-and we did so repeatedly, over years-failing to recognize the significance of our finds, which were preserved and assumed to be somewhat unremarkable, nondescript juveniles of common snakes," Brown explains. He adds that happens quite often in terms of biodiversity discoveries when the next generation of scientists come with the right tools and asks the right questions.

Check out more news and information on New Species on Science Times.