Recent high-resolution images of the largest canyon in the solar system leaves scientists puzzled and perplexed. With lengths that are almost 10 times the Grand Canyon and 3 times deep, scientists wonder how it was formed. 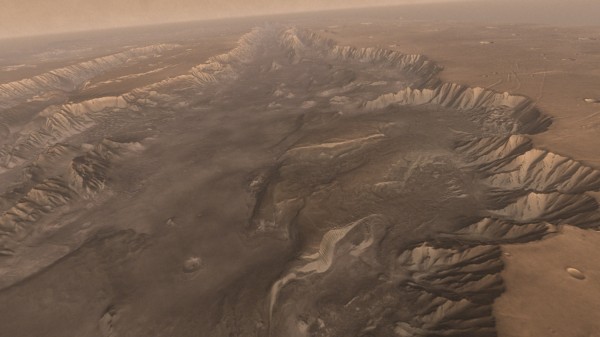 (Photo: NASA)
The largest canyon in the solar system

Largest Canyon in the Solar System

Valles Marineris, according to NASA, is the largest canyon in the solar system found on Mars.

The grander abyss that cuts through the Martian equator spans nearly a quarter of the Red Planet's circumference, making it the largest known canyon in the entire solar system.

Check Out: Possible Life on Ancient Mars Lived Underneath the Surface

Earlier mosaic images of the Red Planet were captured by the Viking Orbiters as early as the 1970s. However, in 2006, thanks to an incredibly powerful high-resolution camera named High-Resolution Imaging Science Experiment (HiRISE) aboard the recent Mars Reconnaissance Orbiter, scientists were able to capture more in-depth images of the largest canyon system in the solar system.

(Photo: The University of Arizone)

Despite the recent images of the Valles Marineris posted by the University of Arizona on December 26, 2020, the origins of the canyon system still remains unsolved.

Scientists remain unsure of how the harsh climates of Mars could facilitate the birth of the canyon system.

How are Canyons formed on Mars?

Here on Earth, scientists have discovered that the Grand Canyon is a result of soil erosion after billions of years of rushing water. On the other hand, the Red Planet is known to have too dry and hot of an environment to accommodate a large enough body of water that can carve the Valles Marineris.

According to an article posted by the European Space Agency, the canyons are more likely formed when the neighboring volcanic system was formed billions of years ago. The Tharsis bulge is home to Olympus Mons, the largest volcano in the Solar System.

ESA proposed that during the Red Planets first billion years, the Tharsis bulge swelled with magma, which caused the crust to stretch and rip apart. This eventually caused the collapse of gigantic troughs of the Valles Marineris.

To this day, the birth of the canyons is no definitive fact. On the other hand, evidence suggests that multiple large scale events in Mars contributed to the canyon's continued erosion. A combination of magma flows, landslides, and ancient rivers could have subsequently given way to the Valles Marineris.

Mineralogical findings collected by various orbiting spacecraft, including the Mars Express, shows that the Martian terrain was altered by running water hundreds of millions of years ago.

Despite no final verdict as to the origin of the largest canyon in the solar system, scientists remain vigilant and hopeful that future explorations will provide more conclusive evidence.

Also Read: Mars Had More Water Before There Was Life on Earth, Ancient Meteorite Shows

Check out more news and information on Life on Mars on Science Times.