An early study shows that the COVID-19 vaccine of Pfizer works against a key mutation detected in variants of the virus in the United Kingdom and South Africa, which are spreading faster compared to the original strain.

According to a Live Science report, while viruses are mutating incessantly, scientists are apprehensive that some of the new mutations in COVID-19, particularly those in a new strain "discovered in South Africa, may make vaccines" not that effective.

The said variant, identified as 501.V2, and another strain detected in the UK called B.1.1.7 both appear to transmit faster compared to the original virus, possibly due to the fact that they have some of the similar mutations in the SARS-CoV-2 spike protein, the defense used by the virus to penetrate the human cells.

Scientists are currently working to understand how such mutations might affect the efficacy of COVID-19 vaccines. 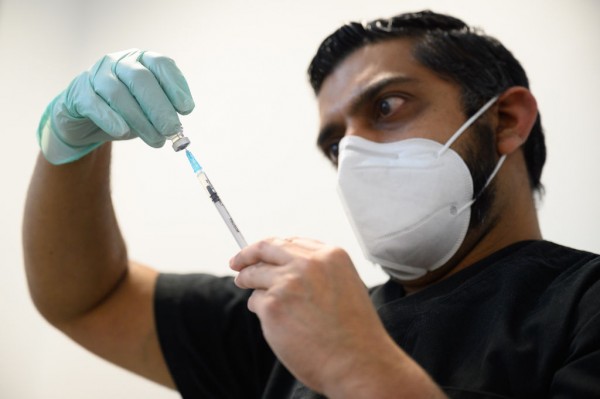 (Photo : Leon Neal/Getty Images)
A member of the Newham Health Trust team prepares a dose of the Pfizer/BioNTech COVID-19 vaccine at the Sir Ludwig Guttmann Building. The UK aims to vaccinate all over-70s, front-line health workers, and the most clinically vulnerable by mid-February, when its current lockdown rules will be reviewed.

A team of researchers from Pfizer and the University of Texas Medical Branch in Galveston produced a version of the coronavirus that comprised a mutation also known as N501Y, present on the spike protein of both strains discovered in the said two countries.

In their study published on January 7 to the bioRxiv preprint database and has not yet been peer-reviewed, the authors wrote, such mutation is of a specific concern as it is located on the spike protein' and is known to increase the virus's capability of binding to human cells.

CNBC Television, as seen on the YouTube video below, came out with a similar report on the Pfizer vaccine's efficacy in the new variants.

To find out how mutation may affect vaccines, the study authors compared how a virus with the new mutation coped with the vaccine compared with an earlier version of the coronavirus that did not carry this new mutation.

To do this, the researchers tested if the viruses were concentrated in blood samples collected from 20 people who had been injected with the Pfizer-BioNTech vaccine.

Since these people had been vaccinated, their blood samples had molecules that could combat the virus, including the so-called "neutralizing antibodies" that stopped the coronavirus from getting into the cells in the first place.

What the Researchers Found in the New Mutation

The study authors wrote, there was no decrease in the "neutralization activity" against the virus carrying the new mutation.

Nevertheless, the research limitation is that the investigators did not test a strain that included all the mutations detected in the spike proteins of the quickly spreading variants both in South Africa and the UK.

The scientists are looking, though, into these other mutations in additional research, said Phil Dormitzer, vice president and chief scientific officer of viral vaccines of Pfizer.

According to The Associated Press, Moderna and AstraZeneca are also currently conducting similar investigations.

The researchers wrote in their study that since the SARS-CoV-2 virus, like other types of viruses, will continue evolving so it is essential to constantly monitor them for mutations that could impact the effectiveness of a vaccine and to be ready for the probability of a future mutation that would require changes to vaccines.

In addition, the study investigators explained that such an update on vaccines "would be facilitated by the mRNA -based vaccine technology's flexibility."

Meaning, since both Moderna and Pfizer developed mRNA -based vaccines, the researchers would only need to "swap out the genetic code" that they used to code for spike protein in the said vaccines with a new version that comprises the new mutations.

Dormitzer said the said data do not suggest a necessity for change. But as always, as the mutations are hitting close enough to home, there is always a need to be ready.