Measured by the Atmosphere-Space Encounters Monitor (ASIM) of the European Space Agency, the anomaly originated at the tip of a cloud over the Pacific island of Nauru.

Experts claim the blue jets can travel lengths of up to 31 miles (50 km) and have lasted less than a second. It reached into the stratosphere. 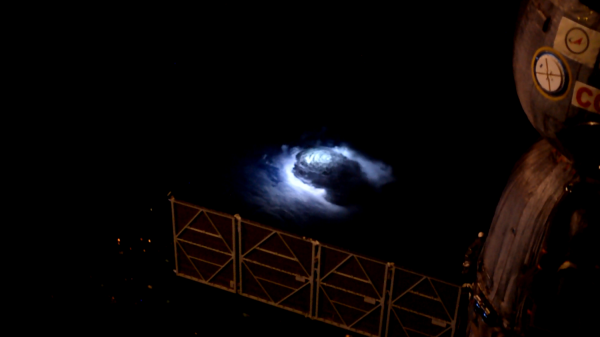 Since blue jets form over the cloud cover, they are challenging to see and observe from down on the Earth's atmosphere.

However, the International Space Station is equipped with a non-obstructed view that orbits about 249 miles (400 kilometers) across the clouds.

Understanding the development in the stratosphere and above blue jets and other energetic events will reveal how lightning is caused.

Are Blue Jets That Important?

Experts still agree that blue jets can play a role in affecting ambient greenhouse gas concentrations, something that research could further explore.

Back in 2018, the International Space Station mounted ASIM, a series of optical cameras and photometers, as well as an X-ray and gamma-ray detector.

We developed the monitor to search for electrical discharges that originate in stormy weather environments and spread into the upper atmosphere above thunderstorms.

The researchers reported a powerful sequence of five 10-microsecond flashes kicked off the blue jet recently observed by ASIM.

What Causes These Flash?

So-called 'egos' are often formed by the flash, expanding rings of visible and ultraviolet pollutants that emerge at the base of the ionosphere, about 50 miles (80 km) above the surface of the Planet.

Electrons and radio waves communicating with the environment are produced by them.

Blue jets, the researchers wrote in their report, are lightning-like, ambient electric ruptures of many hundred milliseconds that spread through cones as they disperse into the stratosphere from the top of thunderclouds.

They are believed to initiate an electrical breakdown between a cloud's positively charged upper area and a surface of negative charge at the cloud boundary and in the air,' they added.

As propagating upwards, the breakdown creates a leader that transforms into streamers. However, the chief's properties, and the height to which it rises just above clouds, are not well described.

The finding is a remarkable highlight of the many modern phenomena that ASIM experiences above thunderstorms, said Astrid Orr, ESA's physical sciences supervisor for human and robotic spaceflight.

Orr added that there is too much to explore and understand our cosmos from astronomy and other scientists.

The study's complete results were published in the journal Nature.