White dwarfs, not our typical kind of star, use an effect identified as "quantum degeneracy." In contrast, main sequence stars like the Sun are fusing nuclear material in their centers to shield themselves from a collapse under their own weight.

According to Universe Today, the "quantum nature of electrons means that no two electrons can have" a similar quantum state.

When one tries to squeeze electrons into a similar state, they are exerting a degeneracy pressure that's keeping the white dwarf from collapsing.

Essentially, binary white dwarfs are fairly typical in the universe. A lot of stars akin to Sun and red dwarfs are part of a binary system. However, there is a limit to how much mass a white dwarf can comprise. 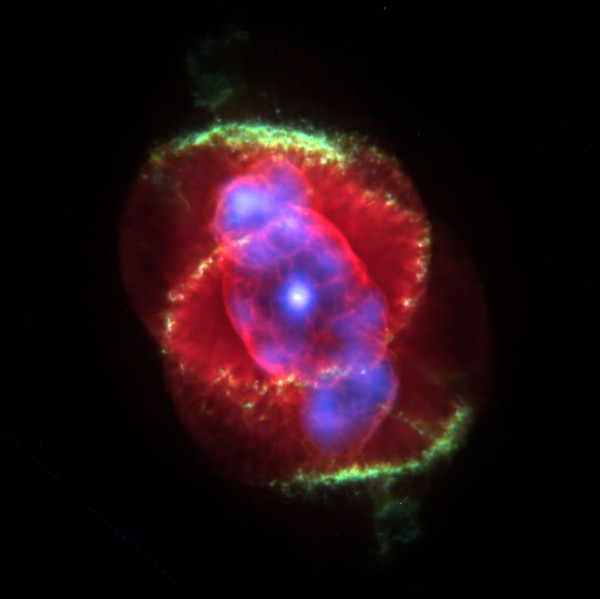 (Photo: NASA/Newsmakers)
Astronomers unexpectedly found a central star in the late stages of life emitting powerful X-ray energy. The X-ray observations of the Cat's Eye Nebula reveal a hot gas cloud around a bright star, which is shedding its material and is expected to collapse into a white dwarf in several million years.

Subrahmanyan Chandrasekhar performed a detailed estimation of this particular limit in 1930 and discovered that a particular white dwarf comprises more mass than roughly 1.4 Suns; gravity will crush the star into a neutron star.

However, this Chandrasekhar limit is grounded on a rather simple framework. One, where the star is steady and is not rotating. Real white dwarfs, on the other hand, are more complex, specifically when they are going through collisions.

Binary white dwarfs are fairly typical in the universe. Astronomers say a lot of Sun-like stars and the red dwarfs are all part of a binary system.

When these stars reach the end of their main-sequence life, they become a white dwarfs' binary system.

Over time, their orbits can deteriorate, eventually causing a collision between the two white dwarfs. What's going to take place next is according to the situation.

Frequently, as shown in the recent Astronomy & Astrophysics paper, the stars can explode either as a nova or supernova, developing a remnant neutron star, although there are times when they can form something more uncommon.

Furthermore, an x-ray source was detected in 2019 that looked the same as a white dwarf, although it was too bright to be caused by the latter.

It was proposed that the object could be an unsteady merger of two white dwarfs. In this new research, a group of researchers used a tool identified as the XMM-Newton X-ray telescope to capture an object's image.

The study authors validated that the object contains a mass that's greater than the Chandrasekhar limit. The said report specifies that this "super-Chandrasekhar object is surrounded by a remnant nebula with high-wind speeds."

A nebular, is more often than not, made of neon, observed as green in the image captured. The said observed object is consistent with the one having been developed by a merger or white dwarfs.

It potentially comprises high rotation, which preempts the object from collapsing and becoming a neutron star.

Eventually, such an object is collapsing into a neutron star within the next 10,000 years. It is likely to create, in the process, a supernova. Seemingly too, a white dwarf can break the Chandrasekhar limit, although only for a short while.

Check out more news and information on White Dwarf on Science Times.