According to the Los Angeles Times, scientists came across the latest strain when searching for indicators of the extremely infectious variant that emerged in the United Kingdom before finding its way to the US. 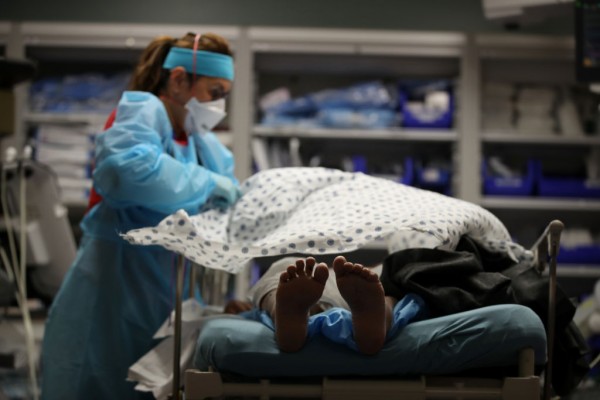 (Photo: Justin Sullivan/Getty Images)
SAN JOSE, CALIFORNIA - MAY 21: (EDITORIAL USE ONLY) A nurse places a blanket over a patient that had just been admitted to the emergency room at Regional Medical Center on May 21, 2020, in San Jose, California. Frontline workers are continuing to care for coronavirus COVID-19 patients throughout the San Francisco Bay Area. This hospital is located in Santa Clara county, has had the most deaths of any Northern California county, and the earliest known COVID-19 related deaths in the United States.

One of the biggest non-profit academic medical centers in the United States, Cedars-Sinai said its staff looked at specimens from 192 patients at its Los Angeles facility. The team also examined more than 4,000 samples between November and December from across Southern California.

In 36 percent of Los Angeles samples and 24 percent of samples from the larger area, the new strain was detected.

The report's co-authors said the frequency "was striking" as the strain was first observed in a single case in July and then not again until October in Southern California.

They said that the rise in cases of COVID-19 in Southern California over the past two months correlates with the appearance of the latest strain, which the researchers called CAL.20C.

In July, the B.1.426 strain was found but was not seen again until three months later. The CAL.20C strain was only visible in October, according to the study. Still, it made up 24 percent of 4,500 viral samples by December.

The report was sent last week for peer examination.

Cedars-Sinai said that the current strain "is suspected to be extremely transmissible," including a variant first discovered in Britain that has been identified in the United States. Still, the study results did not show if it is more lethal than other types of coronavirus.

The researchers said the strain was found in Northern California, New York, and Washington, D.C.

Charles Chiu, a virologist at the University of California at San Francisco, said, per The Washington Post, that the outcome was intriguing, and it was a little worrisome.

But Chiu emphasized that it was too early to assume that the variant is more contagious since scientists may not know whether their sample was reflective or if the variant's increase may be attributed to spontaneous chance, or perhaps a series of superspreader events.

He also raised concerns that a variant-related mutation might make it more immune to vaccines since it takes place in a crucial element of the spike protein targeted by the vaccines. Still, he underscored that the virus must be grown in a laboratory and tested more fully before any decisions can be made.

According to the Cedars-Sinai team, the B.1.426 strain has five mutations, including the L452R mutation, which modifies the virus' spike protein. What the virus utilizes to enter human cells is the spike enzyme.

Researchers told LA Times that they would concentrate on their transmissibility and their capacity to bypass the goggles, medications, and vaccines used as instruments to avoid the outbreak.

Meanwhile, the Centers for Disease Control and Prevention (CDC) is speeding up its efforts to detect coronavirus mutations and ensure that new strains of the disease remain ahead of COVID-19 vaccinations and therapies before collective immunity is attained.