If last weekend you skipped out on the unusual "planetary trio," get ready to howl at the "Wolf Moon." The first full moon of the year will take effect on Thursday, January 28. Hold your gaze on the clouds to catch up with the phenomena.

But at what point will you see the Wolf Moon, exactly? Why does that (extremely cool) name bring it? And how is it feasible to take the best shot of it? Glad you asked: those queries have been addressed and more below. 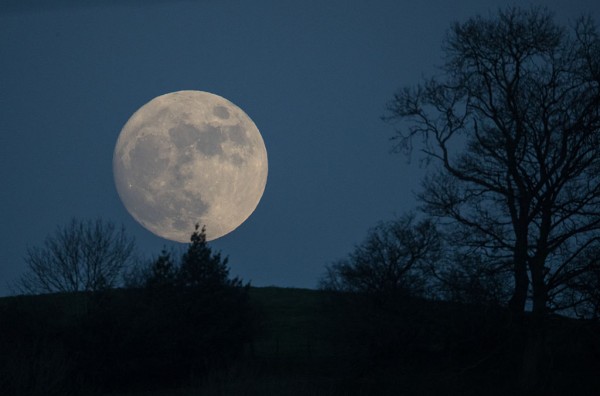 (Photo : Matt Cardy/Getty Images)
GLASTONBURY, ENGLAND - JANUARY 11: A so-called wolf moon rises over Glastonbury Tor on January 11, 2017 in Somerset, England. In some parts of the world, the January full moon is nicknamed the wolf moon, which dates back to the days when native American tribes gave names to each month's full moon to help keep track of the seasons.

What With The Wolf Moon This Year?

Technically, the moon is only absolute for such a brief time, representing the greatest amount of illumination on Earth. This arises simply as the Planet comes between the moon and the Sun, a moment known as 'syzygy.'

Why is it alluded to as the Wolf Moon?

There is no universal agreement, although several accounts suggest that the full moon derives its name from the starving wolves that howl.

The head of the Lunar Branch of the British Astronomical Association, Prof Bill Leatherbarrow, told BBC News that there is still confusion around common historical full moon names. The widely accepted reason for the January Wolf Moon, though, he said, is that it reflects the howling of wolves at the midwinter shortage of food.

Others claim that the full Moon moniker originates directly from the history of Native Americans, who used the lunar cycle as a timekeeping tool.

Several tribes called the full Moon of January as the 'Wolf Moon' after the wolf howls claimed to be triggered by a lack of food during this winter season, according to the Old Farmer's Almanac.

As Dr. Das Baskill, lecturer in physics and astronomy at the University of Sussex, points out, the name might probably have arisen in Europe as well.

Interestingly, there are still lots of other titles for the January full moon: Mnido Giizis, Spirit Moon, Goose Moon and Ice Moon.

Therefore, the January Moon was called 'The Moon after Yule' by the Anglo-Saxons, since it preceded the Winter Solstice.

How much do full moons happen?

A total moon emerges approximately every 29.5 days, the duration of a single lunar period. On February 27, the next full moon, recognized as the Snow Moon, will be observed.

ALSO READ: Astronomy 2021: Your Guide to The Full Moons, Eclipses And Meteor Showers This Year!

What's the easiest way to take a Wolf Moon photograph?

Have you ever used your computer to take a picture of the moon? Then you would realize that the picture is impossible to do the night sky right. And the reason? It's presumably because your phone doesn't use the proper night-time photography settings.

You need to turn off your flash and sensitively turn down your ISO to capture the best shot of the moon. It would also be good to set the focus to 100.

Try an aperture of f/11 to f/16 and a shutter speed of between 1/60th and 1/125th of a second if you are using a compact camera. This slow shutter speed indicates that you may have to maintain the camera or position it incredibly steady on a tripod.

ALSO READ: Space Missions in 2021: Here are The Most Exciting Events To See