Cliché, but true: it's more than the eye meets. This impressive image of the landing site of Apollo 15 was not captured by an optical device, such as a sensor, but rather by a radar telescope reflecting radio waves off the moon's surface.

An extremely accurate image of the moon's surface displaying objects as tiny as five meters in diameter shot with reflected radar signals has been discovered by scientists. 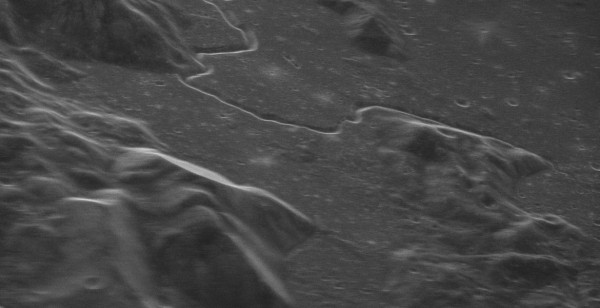 The photograph, reported by the US National Radio Astronomy Observatory (NRAO), shows the 1971 NASA Apollo 15 project landing site and the nearby grooves and jagged craters.

Researchers used satellites to obtain the snapshot, firing a strong radar signal towards the moon, which was then mirrored back into the Very Long Baseline Network, a ten radio telescope system in North America.

How The Apollo 15 Landing Site Looks Like From Earth

A successful preliminary evaluation of the too advanced radio telescope device marks the outcome.

We can see Hadley Rille in the picture above.  The meandering channel that runs through the center. When the moon was already volcanically active, it was produced millions of years ago by falling lava tubes.

You knew it, the circular feature imaged is a crater known as Hadley C, measuring around 6 kilometers (3.7 miles) away and as tiny as 5 meters.

It was the ninth crew flight and the fourth to land on the surface in NASA's Apollo program.

Since Earth has a dense atmosphere and an intense weather mechanism, imaging stuff using a standard optical telescope can be impossible. Scientists usually place their telescopes at high altitude sites situated on a cliff for this purpose.

The Atacama Large Millimeter/submillimeter Array (ALMA) telescope facility, which sits atop a 5,000 m high plateau in Chile, is a fine example.

Which Telescope Did Scientists Use To See Apollo 15 Landing Site?

Although the interference is small if you use radio waves, scientists at the National Radio Astronomy Observatory (NRAO) have been working with radio imaging technologies for the past two years to capture earthly celestial snapshots. The fruit of their efforts in West Virginia's Green Bank Telescope (GBT), the world's first completely steerable radio telescope.

This telescope has a strong transmitter that beams radio waves to the Apollo 15 landing site area. NRAO's continent-wide Very Long Baseline Array detected the mirrored waves that bounced off the lunar surface (VLBA). In order to create a high-resolution picture of the location, this pattern was decoded, and the findings speak for themselves.

With a far more powerful transmitter, the researchers intend to scale up this proof-of-concept that will enable them to imagine tiny objects moving by Earth or perhaps as deep into the solar system as the moons of Jupiter.

Scientists still want to improve it further and collect more accurate photos, like the Neptune and Uranus surfaces, from far deeper into our Solar System.

Karen O'Neil, site director of the Green Bank Observatory in West Virginia, said per DailyMail that the planned system would be a leap forward in radar science, allowing access to never-before-seen features the solar system from right here on Earth.