A new technique for fabricating solar cells, with the help of specially arranged materials in an architecture called nanocomposites, could significantly improve their efficiency. 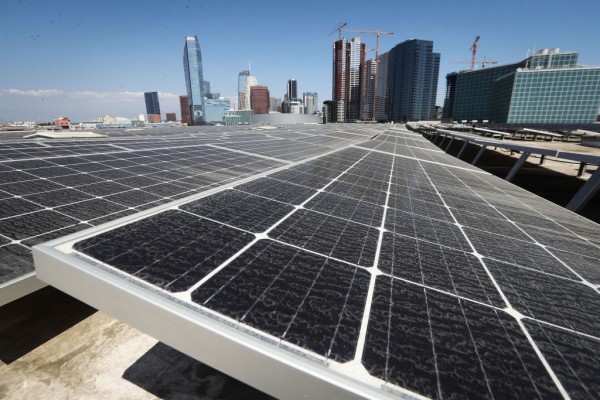 (Photo: Photo by Mario Tama/Getty Images)
LOS ANGELES, CA - SEPTEMBER 05: Solar panels are mounted atop the roof of the Los Angeles Convention Center on September 5, 2018, in Los Angeles, California. The solar array of 6,228 panels is expected to generate 3.4 million kilowatt-hours of electricity per year. California Governor Jerry Brown may sign a landmark bill committing the state to 100 percent clean energy by 2045.

Utilizing an Anomaly in PV Materials

An international research team, led by members from the Martin Luther University Halle-Wittenberg (MLU), report their findings in the journal Nano Letters. Since conventional solar cells are made of silicon, a semiconductor material, "it's not feasible to say that their efficiency can be increased indefinitely," according to Dr. Akash Bhatnagar from the Centre for Innovation Competence "SiLi-nano" at MLU. His team has worked on a phenomenon called the "anomalous photovoltaic effect," which has something to do with some materials' ability to turn light into the potential difference.

This anomalous photovoltaic effect happens in the absence of a p-n junction, which is a positive and negatively doped section of silicon that allows the flow of electrons in the material. Usually, the difference of the asymmetric crystal structures at atomic levels for both sides of the junction guides the direction in which electrons flow. Materials used for this junction are usually oxides, which are advantageous since they are easier and cost-effective to manufacture as well as being more durable. However, their ability to absorb sunlight and natural electrical resistance negatively affects their effectivity as photovoltaic materials.

"In order to utilize these materials and their effect, creative cell architectures are needed that reinforce the advantages and compensate for the disadvantages," said lead author Lutz Mühlenbein.

Researchers used a new cell architecture called nanocomposites to work around these restrictions, together with colleagues from Bergakademie Freibergin Saxony and the Leibniz Institute of Surface Modification in Leipzig, both in Germany, and Banaras Hindu University in India.

Researchers stacked thin, single layers of a typical material in their experiments - each layer only a few nanometers in thickness - and stacked them one after the other. They then offset each layer running in one direction with layers of nickel oxide strips running perpendicularly from the first material. Bhatnagar explains that the strips act as a "fast lane" for the electrons generated when sunlight turns into electricity and is designed. Hence, the current reaches the electrode in the solar cells even faster. The carried electricity passing through the perpendicular strips, according to the researchers, bypasses the resistance encountered by individual electrons should they traverse each individual layer without the nickel oxide strips.

With their new nanocomposite based architecture, researchers found out that the modified solar cells had electrical outputs increased five times compared to the traditional architecture.

"The material forms this desired structure on its own. No extreme external conditions are needed to force it into this state," Mühlenbein explains. Additionally, researchers also included an initial feasibility study that strongly suggests how the novel architecture could also be applied to other materials for the "fast lane" strips aside from the nickel oxide they used. They also recommended that further studies examine the possibility of applying the same technology for solar cells on an industrial scale.

Check out more news and information on Nanoblocks on Science Times.