A recent research warned that one could be subjected to having damaged cognitive ability up for up to six decades if they have been exposed to smog and poor air quality as a kid. 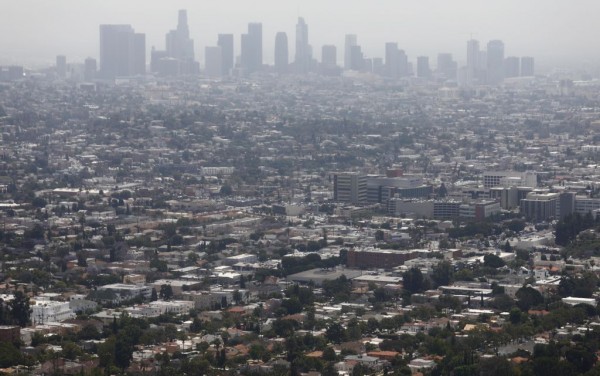 (Photo : Photo by Mario Tama/Getty Images)
LOS ANGELES, CALIFORNIA - JUNE 11: Smog hangs over the city on a day rated as having 'moderate' air quality in downtown Los Angeles, on June 11, 2019 in Los Angeles, California. According to the American Lung Association's annual "State of the Air" report, released in April and covering the years 2015-2017, Los Angeles holds the worst air pollution in the nation.

This was the first time that, after many decades, the results involve children's sensitivity to air pollutants and its influence on their brain.

The report is published in the Journal of Alzheimer's Disease and in the Handbook on Air Pollution.

Dr. Tom Russ, Director of the University of Edinburgh's Alzheimer's Scotland Dementia Research Center, shared on News Medical the impact of very early exposure to air contamination may have on the brain several decades later.

This is the first phase in recognizing the adverse impact of air emissions on the brain, which may help reduce the likelihood of potential generations of dementia.

Researchers used to claim that the effect of early exposure to air pollution on thinking ability in later life was not feasible to investigate due to a lack of evidence on air quality levels until the 1990s when regular testing started.

Hence, experts planned to demonstrate that past air emissions can be measured and then to investigate who, the team says, is connected to cognitive capacity during existence.

To examine the connection between someone's exposure to air pollution and their cognitive skills as they get older, the Scottish researchers used mathematical models.

Lifestyle variables, such as socio-economic status and smoking, were also considered.

Here's What The Research Group Discovered

Experts from the University of Edinburgh measured the general intellect of over 500 persons aged 70 using a questionnaire performed by the same audience when they were 11 years old.

To measure the rate of air emissions they were used to during their early adolescence, they also investigated where the group had lived during their lives.

Such volunteers who were subjected as an infant to air pollutants demonstrated a minor - yet detectable - cognitive deterioration between the ages of 11 and 70.

Researchers behind this research did not explore why environmental contamination tends to induce diminished cognitive capacity. Although previous experiments have shown that it could be related to metal-toting pollutants hitting the brain and destroying neurons in the pollution.

Could There Be Other Factors?

Dr Susan Kohlhaas from Alzhaeimer's UK, who was not involved in the report, noted there was an increasing body of evidence - coupled with a number of other environmental factors - that air quality might raise the likelihood of developing dementia.

'Dementia is not an inherent aspect of becoming older, and the likelihood of acquiring the disease is influenced by variables like age, genetics and the climate,' she added.

She noted that experts can't relate sensitivity to air quality in childhood to any significant shift between the ages of 11 and 70 years from this one study alone.

This analysis, though, indicates that it is possible to use historical evidence to examine large-scale effects like this in relation to brain health.

Hence, Kohlhaas said everyone must do all they can to further minimize the amount of individuals who will begin to have cognitive and thought issues in the future.