The primary module for the planned orbital space station of China recently passed a flight acceptance review and is set to launch in the coming months. This marks the start of a burst of major missions by this country.

This announcement from China Manned Space, the human spaceflight agency of China, comes as China prepares for the construction stage of its very own three-module space station.

The country's core module also known as Tianhe and which means "harmony of the heavens," will be the primary living quarters for astronauts on visits of a maximum of six months at a time.

Essentially, Tianhe will be providing power and propulsion for the entire space station. If features a docking hub that will enable two later investigation modules to join with Tianhe.

The said docking hub will also provide ports for touring manned Shenzhou spacecraft, as well as the Tianzhou cargo vessels. Furthermore, the hub provides an airlock as well, for spacewalks or astronaut extravehicular activities. 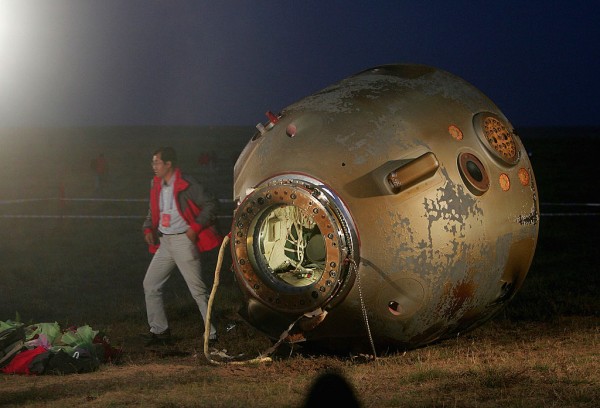 (Photo : China Photos/Getty Images)
Technicians prepare to remove the re-entry capsule of Shenzhou VII spacecraft after the three astronauts exited it and left the landing site in September 2008. The Chinese astronauts returned to Earth safely today after making the country's first-ever spacewalk.

According to a Space.com report, Thianhe, which is roughly 9 feet in length and about 24 tons in weight, is set for launch on top of a "long March 5B rocket from Wenchang Satellite Launch Center," on Hainan island.

The final work and trial of the Long March 5B rocket to take off the mission is in progress in Tianjin, north China. In addition, the rocket components will later on be transmitted to Wenchang by cargo ship.

Cargo and refuelling spacecraft Tianzhou-2 which is set for launch soon after, to tour Tianhe, also passed the flight readiness review. It is set to take off of Long March 7 rocket, which is also from the Wenchang launch center.

China conducted trials and validations of autonomous refuelling in microgravity in 2017 by sending the spacecraft, Tianzhou to dock with and have Tiangong-2 refuelled in low Earth orbit.

Vital Step for the Space Station Project of China

The mission was an important step for the space station project of China, as the future outpost should replenish refuel supplies spent to raise its orbits occasionally in order to counteract impacts of atmospheric drag.

Meanwhile, China has not announced yet a timeline for the said missions. Instead it stated that it might happen in spring.

Previous launches of the Long March 5 were carried out approximately two months from arrival of the rocket components at Wenchang.

The first manned mission to Tianhe, Zhenhou-2, is set for launch following the Tianzhou-2. It will take off from Jiuquan on top of a Long March 2F rocket in Gobi Desert.

China planning to launch 11 space missions in 2021 and 2022 for the completion of its space station complex which includes launches of three modules, four Tianzhou cargo ship missions and four Shenzhou manned missions.

According to this space report, the completed outpost is anticipated to be about a-fifth of the mass of the International Space Station from which China was banned by the United States.

When the country is building the space station solely, an initial selection of international experiments is set to fly to the orbital complex following its completion.

Check out more news and information on Spacecraft on Science Times.