New Approach To Compute Long-Distance Interactions Between Molecules? New Research Has an Answer

Could long-distance interaction between distinct molecules forge a new method of computing? Indeed, interactions between individual molecules on a metal surface extend unexpectedly large distances up to numerous nanometers.

A recently-published study of electronic states' changing shape induced by such interactions has potential application in using molecules as "individually addressable units," according to a Phys.org report.

For instance, in a future computer based on this particular technology, each distinct molecule's condition could be managed, reflecting binary operation or transistors in present computing. 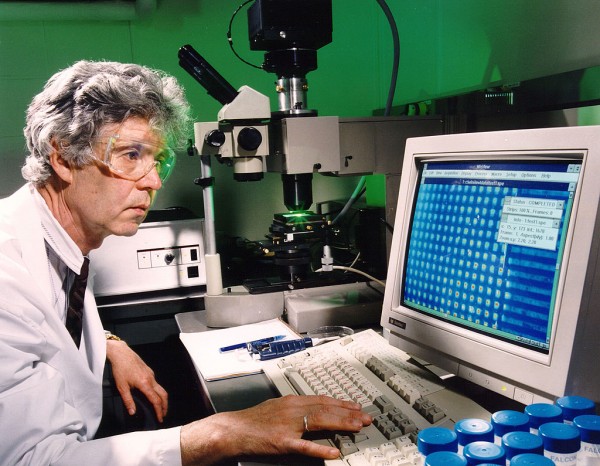 (Photo: Argonne National Laboratory/Getty Images)
In a future computer based on this particular technology, the condition of each distinct molecule could be managed, reflecting binary operation or transistors in present computing.

Such an impact, in which the underlying metal surface is playing a vital role, is seen for intermolecular separation distances of numerous nanometers, substantially larger than expected for this type of intermolecular interaction.

The said report specified these understandings are projected to inform and drive progress in electronic and optoelectronic solid-state technologies' development built from molecules, "2-D materials and hybrid interfaces."

When ornamented with a magnesium or Mg atom at its core, the' four-leaf clover' ligand or phthalocyanine is part of the so-called chlorophyll pigments responsible for photosynthesis in bio-organisms.

Meanwhile, metal-phthalocyanines are typical for their electronic properties' tenability by exchanging the central metal atom and peripheral functional groups and their ability to self-assemble in extremely ordered single layers and nanostructures.

Essentially, quantitative investigational results and theoretical modeling presented that such an interaction was because of mixing between the quantum mechanical orbitals, which identify electrons' special distribution within the molecules, particularly of neighboring molecules.

Such a molecular orbital mixing results in substantial changes in electron energies and electron distribution symmetries.

Long Range of Molecular Interaction as a Result

The long-range intermolecular interaction resulted from the molecule's absorption on the metal surface, spreading the molecule's electrons' distribution.

According to Dr. Marina Castelli, the study's lead author and FLEET member, there was a need to push "their scanning probe microscope to new limits" when it comes to spatial resolution, as well as the complexity of data acquisition and assessment.

It was a big switch in measuring the intermolecular interaction from the viewpoint of symmetries of electrons' spatial distribution, instead of the usual spectroscopic switches in energy, which can be subtler and misleading.

Furthermore, this was the primary understanding that got the study investigators to the finish line, and the reason as well, they think that this impact was not observed before.

Dr. Muhammad Usman, a collaborator from the University of Melbourne, said, essentially, "The excellent quantitative agreement between experiment and the atomistic DFT theory validated the existence of long-range interactions, giving the research team confidence in their conclusions.

This research results can have great insinuations in the solid-state electronic and optoelectronic technologies' development based on "organic molecules, 2-D materials, and hybrid interfaces.