Can Lost Birds Read The Earth’s Magnetic Field To Find Their Way Back?

Dozens of studies have shown that many things depend on the Earth's magnetic fields to orient themselves, especially those migratory birds that fly long distances. 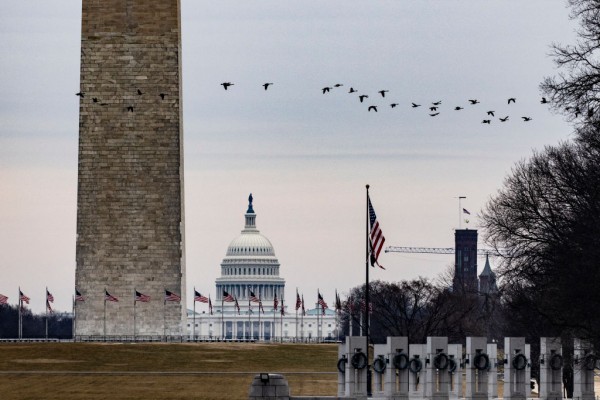 (Photo : Samuel Corum/Getty Images)
WASHINGTON, DC - FEBRUARY 15: The U.S. Capitol is seen past the Washington Monument as a flock of Geese fly over the National Mall on President's Day, February 15, 2021 in Washington, DC.

Magnetic field lines, it points out, can only serve as guard rails or straight-line directions for the flight route of a bird. They may even enable birds who drift off course to get back on track.

The Earth's geomagnetic signatures give directional signs for reed warblers that keep going far from home. Several clues, including odors, infra-sound, and also gravity differences, have been suggested as directions for migratory birds.

Researchers kept many reed warblers in captivity for a few weeks to help grasp how birds recover their bearings after being blown off course mid-migration. They will then turn to the magnetic signatures of areas many thousand miles away - far from their typical migratory corridor.

Even when they got lost in the position they knew well, all the warblers took off to start their migratory journey flying through the artificial magnetic field signatures they were leaving the area simulated.

In a new article, released Friday in the journal Current Biology, scientists outlined their findings.

"The overriding impulse was to respond to the magnetic information they were receiving," study co-author Richard Holland, researcher at Bangor University in Wales, said in a news release.

"What our current work shows is that birds can sense that they are beyond the bounds of the magnetic fields that are familiar to them from their year-round movements and can extrapolate their position sufficiently from the signals," said Holland, a researcher at Bangor University in Wales.

ALSO READ: Migration Pattern of Birds Are Getting Disrupted By Climate Change on a Continental Scale

This specialized skill helps birds, as powerful storms and atmospheric winds push birds far off their desired path, to find their way back to their normal migratory route.

The birds nevertheless displayed the desire to resume their trip as though they were in the position indicated by the magnetic signal they were receiving. They use such 'GPS' while remaining physically positioned at their capture site and witnessing all other sensory hints about their location, including starlight and the sights, scent and sounds of their actual place.

They directed themselves to travel in a direction that would take them from the position recommended to them by the magnetic data they got 'back' to their migratory route.

Researchers refer to this capability as "true navigation."

Lead author Dmitry Kishkinev, a researcher at Keele University in Britain, said the lost birds could return to a known goal after displacement from a completely unknown location without depending on the same surroundings or information collected during the outward journey.

Reed warblers have been seen previously by scientists to use magnetic cues to explore their natural environment. The new results show that the same navigational skills function in international environments.

But researchers suggest that more experiments are required to decide if anything equivalent to map-reading or more analogous to compass-reading is being used.

Check out more news and information on Migratory Birds in Science Times.