LOOK: Alligator Popsicles in Oklahoma As Reptiles Stick Snouts Out of the Frozen Water

Oklahoma natives woke up to find alligator popsicles - the huge reptiles lying motionless with only their snouts sticking out of the ice - shortly after a cold snap landed on the Southern US earlier this month.

A number of questions have puzzled the locals: why were these alligators lying steady with their snouts out instead of hibernating fully in caves or swamps? And more importantly, were alligators always present in Oklahoma? 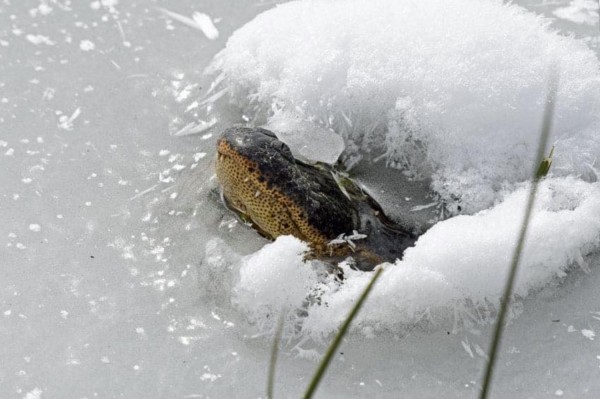 Alligators in the Sooner State

News of these "snorkeling" alligators appeared on the Oklahoma Department of Wildlife Conservation (ODWC) Facebook page. Credited to the winter storm that swept through the South, the wildlife agency received inquiries from people about these huge reptiles. The ODWC reported that their biologists have been monitoring the alligator population, reporting a 100% survival rate for the monitored species. However, the Oklahoma wildlife agency also reported that the younger members of the population most likely did not make it out of the cold.

"While this is an unfortunate loss the population remains sustainable, healthy, and is expected to continue to thrive," the ODWC Facebook post concluded.

The post sparked a wave of inquiries and debates on whether the reptile, scientific name Alligator mississippiensis, is a native or introduced species to Oklahoma. Comments on the Oklahoma wildlife conservation range from surprise that the state had alligators to theories to how they got there.

However, an 1866 account from an Oklahoman man describes the same species, strongly suggesting that they are indeed native to The Sooner State. Other alligators have been gradually introduced to wetlands situated in southeastern Oklahoma, according to ODWC's Wildlife Diversity Communication Specialist Jena Donnell in a statement to LiveScience.

The Nature of Alligator Popsicles

The snorkeling alligators found in Oklahoma were completely normal, as the animals' response to extremely low temperatures. This "icing" response is technically known as brumation and is the reptilian equivalent to the better-known hibernation mammals go under during wintertime.

In freezing environments, reptiles like alligators begin to drastically lower their metabolism rates, they become lethargic and almost completely immobile. An article from the South Carolina Aquarium explains that since they are cold-blooded creatures, alligators rely on external environmental factors to help them regulate their own temperatures. It makes the cold temperature a disadvantage for them, forcing them to brumate as a means of survival.

In comparison to mammalian hibernation - where animals completely fall for a long and deep sleep, without any activity such as eating or drinking - brumating reptiles still have periods of activity. They leave their snouts out to maintain respiration, and they still drink to prevent dehydrating.

Aside from the alligator popsicles seen in Oklahoma, alligators have other adaptive strategies during the winter. While they become lethargic and mostly drop feeding, some of them create mud holes for "warmth and shelter." On warmer days, they usually emerge from their hiding places to bask in the sun. The South Carolina Aquarium article explains that alligators have scutes - the ridges on their backs that are actually bone plates that help absorb and conduct heat to the rest of their body.

RELATED ARTICLE: Hibernation Explained: Vital for Some Species, but Not Humans

Check out more news and information on Alligators in Science Times.