Excavation efforts at the ancient city of Pompeii revealed an ornate Roman chariot in an "almost intact" condition on Saturday, February 27.

The Archaeological Park of Pompeii and the Public Prosecutor's Office of Torre Annunziata made the announcement - a discovery with "no parallel" - finding the four-wheeled horse-drawn carriage within a portico of a notable Pompeii stable. Three horses buried in ash and pyroclastic materials were recovered from the very same site back in 2018, one of which was still tethered to its harness.

Pompeii, together with its neighbor city Herculaneum, was buried in flowing lava during the 79 AD eruption of Mount Vesuvius. The eruption claimed anywhere between 2,000 to 15,000 people at the time. 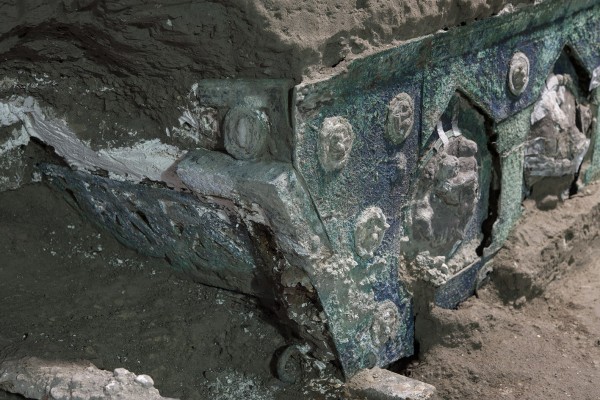 An Exceptional Discovery With No Parallel

"A large ceremonial chariot with four wheels, along with its iron components, beautiful bronze and tin decorations, mineralized wood remains and imprints of organic materials (from the ropes to the remains of floral decoration), has been discovered almost intact," said a statement from the Pompeii archaeological park. They call the find an "exceptional discovery" that has "no parallel in Italy thus far," owing to its excellent preservation state.

The excavation site where the Roman chariot was found is known as the Civita Giuliana, a villa in the suburbs located only a few hundred meters from the heart of Pompeii, then a bustling city and a key location in the Roman empire. This Roman chariot discovery is the latest in an excavation program by the local authorities to combat illegal activities in the historic site. These activities include tunnel digging to find artifacts - without government permission - that can be sold on the black market.

In an additional statement from the Pompeii archaeological park, looters narrowly missed the room where the Roman chariot - identified to be a luxurious version of the common horse-drawn transport - had been sitting for almost 2,000 years. Illegal activity had left excavation tunnels on both sides of the room where the impressive discovery was made.

To recover the Roman chariot in such a great condition, archaeological specialists were brought in - pouring plastic into gaps and voids in order to better preserve any organic imprint that might have been trapped with it. This practice allowed the Pompeii team to recover even the rope imprints, "thus revealing the chariot in all its complexity."

In the same statement, Italian Culture Minister Dario Franceschini says: "Pompeii continues to amaze with all of its discoveries, and it will continue to do so for many years yet, with 20 hectares (50 acres) still to be excavated."

The Ancient Equivalent of a Lamborghini

"It is an extraordinary discovery for the advancement of our knowledge of the ancient world," shares the Archaeological Park of Pompeii outgoing director Massimo Osanna.

He adds that the discovery is actually a "ceremonial chariot," most like the Pilentum that has been referenced in prior historical accounts. It was not intended for everyday use, like agriculture, or transport, or commerce. The Pilentum, with its ornate furnishings, was most likely used for festivities, parades, and processions."

In an interview with online and radio outlet NPR, University of Massachusetts Amherst professor Eric Poehler - also an expert in ancient Pompeii traffic - expressed his amazement at the discovery. "Many of the vehicles I'd written about before ... are your standard station wagon or vehicle for taking the kids to soccer," Poehler tells NPR.

"This is a Lamborghini. This is an outright fancy, fancy car," the UMass Amherst professor exclaimed.

The four-wheeled processional chariot. The latest discovery of #Pompeii. pic.twitter.com/4OssC4Crdp

Check out more news and information on Pompeii and Mount Vesuvius in Science Times.