Kate Rubins and Victor Glover of NASA emerged from the revolving lab lugging eight-food duffle-style bags full of hundreds of pounds of mounting supports and struts.

A Fox News report described the equipment as quite so big and awkward that it needed to be taken apart for it to get through the entrance.

In connection to this, Mission Control radioed saying that they know it is quite tight in there. Glover swiftly started to put the struts together in a triangle shape through the use of a cordless power drill. 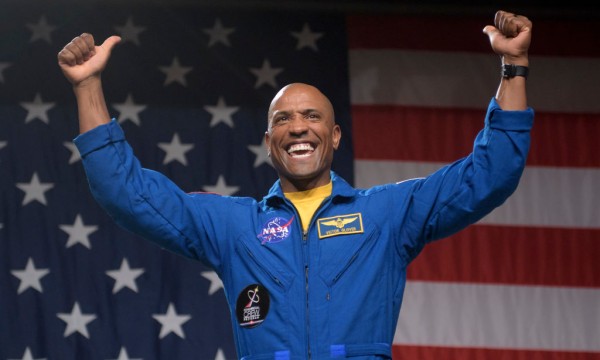 (Photo : Bill Ingalls/NASA via Getty Images)
NASA astronaut Victor Glover is seen during a NASA event where it was announced that he, and NASA astronaut Mike Hopkins are assigned to the first mission to the International Space Station onboard SpaceXs Crew Dragon.

The six new solar panels that SpaceX will deliver in pairs over the coming year or so should boost the electrical capability of the station by as much as 30 percent.

Moreover, Glover and Rubins needed to assemble and fasten the struts down for the first two solar panels, due for launch in June.

The currently existing eight solar panels are now around 12 to 20 years old, most of them beyond their design lifetime and declining.

Each of the panels is about 112-feet long by 39-feet wide. Tip to tip, measuring the center framework, each of the pair is stretching is around 240 feet longer than the wingspan of Boeing 777.

Boeing supplies the new roll-up panels, roughly half the size of the old ones although just as powerful. And that's because of the most recent solar cell technology. The said supplies are said to be place at an angle on top of the old ones, which will continue operating.

Views from the new high-definition helmet camera of Rubins were striking, specifically those that showed the vivid blue Earth 270 miles under. According to observation of the Mission Control, the said views were quite fantastic.

The spacewalk was the third for Rubins, a disease specialist, and Glover, a Navy pilot. Both of them, the report specified, could end up with a flight to moon.

In addition, they are among the 18 astronauts newly assigned to the Artemis moon-landing program of NASA. The next batch of moonwalkers will be coming from this group.

Earlier on, Vice President Kamala Harris made a congratulatory call to Glover, as introduced on NASA's YouTube below, and the pioneering African-American astronaut to spend complete time at the space station.

Harris said, they are proud of the astronaut for the history making he's doing. Glover, as a response, said that it wouldn't be the last. He added that they wanted to make sure that they can continue doing new things.

Rubins on the other hand, is scheduled to float back out later this week, with Soichi Noguchi, a Japanese astronaut, to wrap up the solar panel prep project, not to mention vent and reposition ammonia coolant hoses.

The two astronauts were among the four arriving later this year via SpaceX. Rubins on the other hand, launched in October last year, from Kazakhstan alongside two Russians. All of them are scheduled to go back to earth come spring.