Jupiter and Mercury Conjunction: How to Watch, When to See Rare Astronomical Event

Last month, a rare astronomical event was observed in the night sky when Jupiter, Saturn, and Mercury were in triple conjunction between February 25 to 28. Looking here from Earth, the planet Mercury seemed to have visited the outer gas giant planets Saturn and Jupiter.

But March also has its astronomical events coming within the month. One of which is the conjunction of Jupiter and Mercury, which last occurred on December 21, 2018, according to news.com.au.

Conjunctions occur when one planet's orbit around the sun aligns with another which makes them appear as if they are orbiting in close proximity when viewed from Earth. 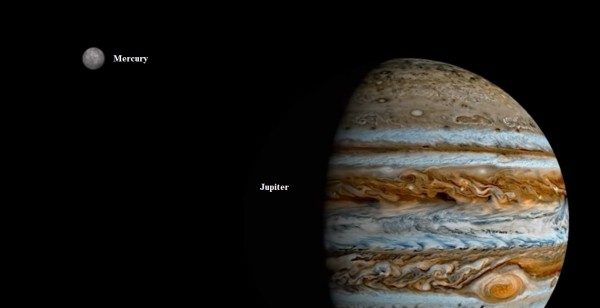 (Photo : YouTube)
Must Watch Astronomical Events In March 2021 | Asteroid | Conjunction | Supermoon Screenshot from YouTube/ The Secrets of the Universe

Jupiter-Mercury Conjunction: When and How To See It

This month, the Jupiter-Mercury conjunction will happen on the morning of March 5. Mental Floss reported that the largest planet and smallest planet in the Solar System would be 19.4 arcminutes of each other in the sky's dome. It is estimated that their distance will be roughly two-thirds of the width of the moon.

Those in the southern hemisphere, particularly in Australia, will get the best chances of watching the Jupiter-Mercury conjunction.

It is advised to wake up early to see the Jupiter and Mercury conjunction in the early morning this Friday. According to Forbes, spectators should look low to the eastern horizon with binoculars before dawn and see the conjunction of the two planets, which are only separated by a mere 0.3°.

Although even without using binoculars, the two planets can still be visible by the naked eye. However, if you have failed to see its peak, the two planets will still appear exceptionally close in the next few days.

Mercury will be hard to spot at night due to its minute size and proximity to the Sun. But Jupiter will appear bright and large, which gives a chance to find the nearby Mercury.

The southern hemisphere may have the best chances of viewing the conjunction, but those in the northern hemisphere could still spot the two planets as they rise above the horizon just before the Sun obscures the view.

Other Astronomical Events In March

Aside from the Jupiter-Mercury conjunction that will be happening this Friday, Forbes reported other astronomical events that are set to occur within the month.

For instance, on Wednesday, March 3, Mars and Pleiades star cluster or also known as M45 will be visible in the southwestern sky about two hours after sunset. It can be best seen using binoculars. It will be the night that the Red Planet is closest to the blue stars of M45.

Then after the Jupiter-Mercury conjunction will be the last quarter moon on Saturday, March 6. The Earth's natural satellite will reach its Last Quarter phase, which essentially means that the Moon will rise after midnight. For the next ten days, the sky will be moonless which is perfect for stargazing.

RELATED ARTICLE: The Truth Behind the Smiley Face Venus, Jupiter and the Moon Will Form on May 16