Penguin Saves Himself From Killer Whale in Antarctica; Here's How It Jumped Itself Onto Boat [WATCH]

A penguin successfully escaped from a pod of killer whales by jumping into a boat full of Antarctica tourists. 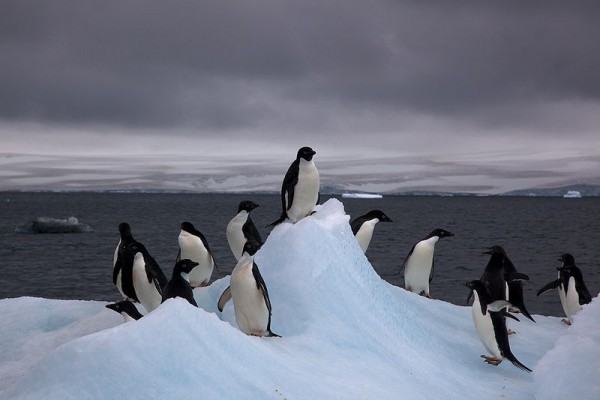 After a sad first attempt, where the small animal threw itself headfirst into the side of the boat and bounced out into the dangerous water, the second attempt was successful.

The flightless bird soared out of the water in a thrilling pursuit around the tour boat before leaping onboard to the shocked passengers' delight.

What Happened To The Penguin?

The Sun said travel bloggers Matt and Anna Karsten were on a trip through icebergs when many orcas swam up to their Zodiac boat in the Gerlache Strait, Antarctica.

The penguin was repeatedly seen swimming out of the frozen water, with the killer whales trailing closely behind.

In a last-ditch effort to reach freedom, the penguin attempts to fly into one of the boats.

The bird then belly-flops the vessel's side and bounces back into the water, creating a somewhat comical scene.

The penguin makes it over the boat's rim in a matter of seconds and is helped onboard by visitors, where it is cheered on by the crowds.

The orcas followed the zodiac boat for a while after the ordeal, according to the travel writer.

Matt told DailyMail that they were on their way to take a scenic Zodiac cruise between icebergs when they saw a massive pod of orcas playing in the water nearby.

Anna caught the Gentoo penguin's video swimming away from the orcas' relentless pursuit, according to Yahoo! Life. The orca swam straight up to the camera and said hello, according to him. Suddenly, killer whales began attacking a gentoo penguin that was attempting to eat it.

"Back and forth, they went with the penguin swimming fast with the orcas on its trail. Eventually, the poor penguin tried to jump into a nearby zodiac boat," Matt narrated.

The orcas followed the zodiac boat for a short while, Matt added. The whales then gave up, leaving the penguin safe and sound with his new mates.

The Independent said someone in the audience also suggested that the whales attempt to board the dinghy to search for their expected meal.

After a short cruise, Matt said the penguin waved farewell to the yacht and dove back into the freezing water.

Matt, also known as the Expert Vagabond, has been traveling the globe since 2010, visiting more than 50 countries. He has now based in Yucatan, Mexico, after his second child's birth.

Is It Normal For Orcas to Chase Its Preys In Front Of Other Visitors?

It isn't the first time that humans have been in the right position at the right time to assist, Good News Network said. In Halibut Cove, an otter was in similar difficulty and swam desperately for safety while the orca chased after her.

Just as the orca approached John Dornellas' ships, it scrambled onto the stern. He went back to the boat's deck three more times before the coast was clear.