Sinkholes: Why They Keep on Swallowing Things? Why Does It Happen? [EXPLAINER]

Sinkholes emerge out of nowhere, consuming everything in their way and giving the impression of the apocalypse. 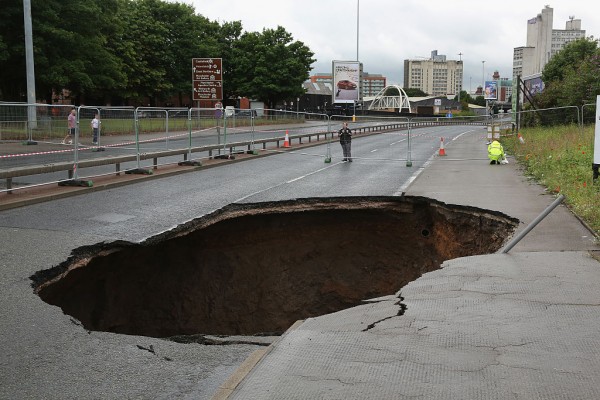 (Photo: Christopher Furlong/Getty Images)
MANCHESTER, ENGLAND - AUGUST 14: A sinkhole appears on Mancunian Way in Manchester after heavy rain on August 14, 2015, in Manchester, England. Heavy rain and flood warnings have been issued by the Met office as downpours of up to 20mm an hour possible in some areas.

Sinkholes tend to be an epidemic in the United Kingdom. Independent.co.uk reported a 15-foot depression appeared on the M2, a 30-foot crater swallowed a vehicle in High Wycombe, and a 35-foot sinkhole appeared in a suburban driveway in Hemel Hempstead.

Thankfully, no one was injured in all of these accidents, but the possibility of the earth unexpectedly opening up is always frightening.

However, there is some fairly straightforward research that can be used to describe them.

Sinkholes: What Causes Them?

Sinkholes - also known as dolines - are formed by a variety of mechanisms, including dissolution, collapse, and erosion, according to BGS UK.

Sinkholes are formed as soluble rock dissolves at the surface. When limestone rocks are attacked by acidic rainwater or groundwater, for example, they melt.

Collapsing sinkholes are the result of a cave passage steadily falling at depth. Surface subsidence (a 'collapse sinkhole') may result from the collapse propagating up through the overlying strata.

Some sinkholes are created by moving water erosion of thin, unconsolidated content rather than limestone dissolution. A technique known as "soil piping" may be used to clear loose material by forming vast voids within the sediment. The incident in Guatemala City in May 2010 was one of the most dramatic cases of this form of failure. Following a tropical storm, cavities formed in thin, unconsolidated volcanic deposits. These then collapsed, forming a 100-meter-long, 20-meter-wide pipe.

Sinkholes: Where Do They Form?

ABC.net.au said sinkholes are much more likely to grow in limestone areas in tropical, damp climates than in dry climates.

Rapid sinkholes are more likely to burst through in tropical areas where the formation is more rapid.

Mining work is thought to have caused some of the world's biggest sinkholes, the report added.

Sinkholes: What Are the Signs That Something Is Wrong?

Sinkholes don't often appear out of nowhere; they can take months or years to develop.

It's the final point, where the hole or basin forms at the very surface, that's unexpected.

Here are some indicators that you might be dealing with a slow-burning sinkhole:

Sinkholes: Can It Be Prevented?

Many natural sinkholes, according to the Saint Johns River Water Management District, are unavoidable. Those caused by human activities, especially those caused by over-pumping groundwater, may, however, be prevented—water tables in the limestone and cavities under Florida's sand and clay soil decline during dry periods. A collapse can be triggered by a combination of gravity, lack of buoyancy, and water pressure.

The district is in charge of ensuring the water supply's long-term protection. Although water restrictions can be inconvenient for residents and businesses, it is important to limit outdoor watering throughout the year, especially during a drought. Long-term water quality safety necessitates public cooperation.

Check out more news and information on Environment on Science Times.